Ooooh, so the puppy bites after all!

Indeed, How to Get Away With Murder‘s Wes finally bares his teeth in this week’s episode — but is he actually going for the kill or is it merely part of an elaborate act that will end with a handful of treats and a pat on the head from Annalise?

Season 3, Episode 7 finds The Student Sometimes Referred to as “Waitlist” dippin’ it and doin’ it with new crush Laurel, spontaneously lying to New York City cops about having witnessed Charles Mahoney at the scene of their mutual biodad Wallace’s murder and having a weird heart-to-heart with Annalise in which she perhaps tells him more about her relationship with his late mother than he wanted to hear.

“You don’t have the luxury of guilt,” she tells him, invoking Rose’s sacrifices on his behalf, after he confesses feeling responsible for all of the horrors in his mentor’s life. “Your job is to live as good a life as you can. We both owe her that.” But uh-oh, turns out Charles has an alibi for the night Daddie Dearest took a sniper’s bullet to his terrible, no-good, very bad noggin.

Later, in our “Fire Night” flash forward, we learn Annalise is being held on charges of murder and arson — and that “an anonymous source” is the one who’s put our anti-heroine in such a perilous position. As the hour ends, we see Wes sitting down with detectives and demanding a blanket immunity deal in exchange for helping to bring “her” down. And girl, we know he’s not talking about Lurky McChurchmouse or Meggie McSaccharine. 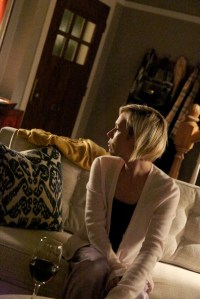 The other big plot developments from “Call It Mother’s Intuition”?

* Nate stokes Wes’ paranoia by telling him to “just watch your ass” when it comes to Annalise. (Maybe he’s just jellie about all the freaky teacher-student sexual tension from which he’s being excluded.)

* Oliver finally tells his hot, bearded beau that he’s HIV positive — at the exact moment they’ve stripped down to their skivvies — and dude responds in the exact opposite way we’d hoped. “I don’t know if I’m ready to deal with all this,” he says, as the collective HTGAWM fandom rolls our eyes and goes, “Boy, bye.” This heartbreak sends a drunken Oliver back to Connor, making googly eyes and saying he’s “not sure if it’s me being selfish… but I miss you.” BUT YA ARE, OLLIE! YA ARE BEING SELFISH! This doesn’t stop the ex-lovers from turning Michaela’s duvet upside down, of course.

* Frank creepily sneaks into Laurel’s apartment just in time to see her toss Wes’ briefs on the floor. This drives him crying and snivveling to Bonnie, who is not forgiving him for skipping out on their dreams of living a life under assumed aliases in Oregon. “I’m not mad, I’m just bored,” she sighs, but later, when she’s telling him he killed the idea of “them” the minute he abandoned her in a hotel room, it’s pretty clear that she’s not mad, she’s enraged. “GET OUT!” she screams over and over — and not in the kicky Elaine-from-Seinfeld type of way. 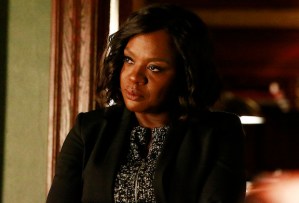 * The Keating Five lashes out at Annalise for lying about Charles Mahoney’s lack of alibi, to which she reasonably shoots back, “Sometimes I lie to protect you, to keep you from worrying.” When that doesn’t work, she takes the lessons learned in her AA sharing sessions and applies it to her home-work-conspiracy space. “Tell me all the ways you think I’ve ruined your life,” she challenges her students. And they tear into her (verbally speaking) like a flock of seagulls going after a clumsily dropped shawarma.

* The case of the week involves a mother from hell who, it turns out, is poisoning herself with antifreeze to punish her three kids for joking about their desire to turn her into a skin suit and/or cook her in a vat of chili. See, Middleton students? Annalise isn’t that bad. 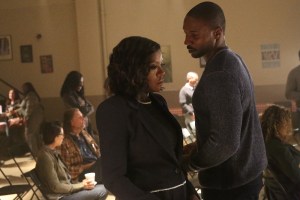 * Oh, and there’s a guy running Annalise’s AA meeting who’s so next-level hot that I had to flip on the air-conditioning on this day, Nov. 3, 2016, just to throw my internal temperature back into balance. “Show your face around here more often — I’ll hook you up one time,” he tells Annalise, when she suggests he mark her attendance, then let her escape during coffee break. Oh, Pete Nowalk, get thee to the writer’s room because I NEED TO SEE THAT HOOKUP.

Below, Season 3 newbie Luna (Lauren) Vélez breaks down President Hargrove’s emotional AA reveal, addresses the possibility of a hookup with Annalise and shares some theories about her character’s true agenda. 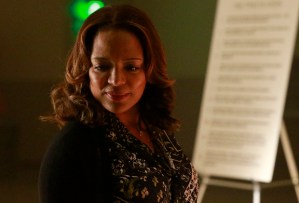 TVLINE | This week, we got some real insight into President Hargrove’s character via her emotional share at the Alcoholics Anonymous meeting. What did you think as you read the script and realized you’d get to go that deep?
[Creator] Pete [Nowalk] was wonderful about this speech. We talked about it a lot. I have some friends in AA, and I wanted it to be really honest and accurate. It was really hard, though. I forgot this meeting would happen in front of 50 extras. It built in a layer of letting go and discovery — which was awesome. I thought about what this woman must be going through, carrying all this weight and the feelings that come with it: Shame, regret, all the things that drove her to alcoholism. This pressure to be perfect and to achieve. She’s one of a handful of women who are university presidents. It didn’t come easy, but it’s taken a toll. And her speech captures all of that struggle.

TVLINE | After that share, Hargrove has a somewhat tense interaction with Annalise where she finally says, “Let’s consider a scenario where I’m not the enemy.” Is she trying to make peace, or deep down does Hargrove want Annalise gone from Middleton because she comes with so much baggage and maybe could threaten Hargrove’s own job?
I don’t see that. There really is something about being a woman in power — whatever color or ethnicity you are. And here is another woman, and Soraya is hoping they’ll get along, that she doesn’t have to be the only one, that Annalise might be an ally. It’s just been contentious from the beginning. Soraya tried really hard to smile her way through it, to be understanding and supportive, but at every turn, Annalise just slaps her down. Here we are, Soraya’s just given this speech and revealed that she’s losing her kids, she’s separated from her husband, she has blackout drinking bringes — and Annalise’s response is par for the course. That prompts Soraya to say, “Can we just stop for a moment? We don’t need to do that here. We’re all safe in this environment. Everyone’s raw and naked emotionally.” There’s maybe a sense of “Show a little respect for where you are.” 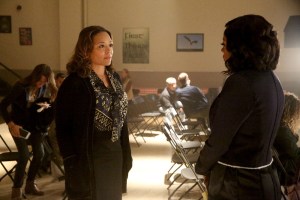 TVLINE | Hargrove is enigmatic. She has a relationship with whatever board member found the recording of Annalise slapping her client — however that got recorded — and got Annalise in trouble with the Bar Association. Is Hargrove just trying to stay on top of any fires that need putting out or does she have a darker agenda?
I don’t know about a nefarious nature, but she for sure has an agenda. [Laughs] She’s the president. She has to have an agenda. This board member, Barry Lewiston, I’d love to know what that relationship is. I’ve made up a [back]story for myself. But clearly, he has a lot of power and reach. Who knows? Maybe he knows about her drinking or can threaten her job? That’s what I love about this show, connecting those dots. But I do think Soraya is very smart. She’s not manipulative at heart, but like I said, she does have an agenda.

TVLINE | Some TVLine readers have commented that there seems to be a sexual chemistry between Soraya and Annalise. Have you heard that from anyone, and do you have any thoughts about that?
I know! [Laughs] That door obviously opened up because of Annalise’s relationship with Eve. I’ve had people say that to me too, but I don’t feel like that’s where it’s going. Maybe this is Annalise’s first true friendship? That’s not something we’ve seen for her. But then again, I don’t know! [Laughs]

TVLINE | Your character is one of the few people to get a win against Annalise, or to get her against the ropes. Thanks to Hargrove’s moves, Annalise has to attend AA meetings, her tenure is not guaranteed, her law license is in jeopardy. And yet at the same time, Annalise extends an olive branch to her — giving her the name of a possible divorce attorney at the end of the hour.
The one thing Soraya does have is the element of surprise. Annalise thought initially, “This is gonna be easy. I can bulldoze my way through this interaction.” But part of Soraya’s M.O. is to let you get as close as she can, to really see your true colors, then deal with you accordingly. Annalise didn’t think Soraya could stand up to her, and she’s proven her wrong a few times. Soraya seems to be so even and such a good girl — and I’m hoping they forge a friendship or something dot-dot-dot. [Laughs]

TVLINE | This show makes me so paranoid that I start wondering: Is Soraya really an alcoholic? Did she inflitrate the AA meeting to gather intel on Annalise? Also, we know the person who is dead under the sheet is a man — could Soraya be transgender, and maybe the police misidentified her? What is this woman up to? When she drops little comments to Annalise like, “I heard you got your student a lawyer,” there’s an edge to it! Am I crazy to have a tingle of suspicion or conspiracy theory?
No! I don’t think so at all. When Soraya says “I heard you got your student a lawyer,” I was trying to figure out why she’d bring that up after her big [AA] share. She tells Annalise later, “Don’t be this way. This is a safe space.” But it’s Soraya who brings up that question. Is she trying to push buttons or is this just an awkward moment in which she reaches for something seemingly innocuous? I don’t know! But even if it’s not a conscious thing, there’s always an agenda — not in some Machiavellian way. But she’s a woman who’s always looking around to make sure there’s no attackers coming at her. She has this past that no one knows about —except for Annalise. So, there’s a level of paranoia she has. She’s lost her kids. She’s walking a tightrope — and she could fall off.

TVLINE | Can you safely say Soraya is not dead by the time the fire in Annalise’s house occurs?
All I can tell you safely is we don’t know what my character was doing that night. We don’t know a lot about that night. I remember Season 1 of this show, the big reveals, my mouth would be hanging open for weeks going, “What? What?! WHAT?!” I suspect it’ll be the same this time.

TVLINE | Soraya’s absence is indeed conspicuous in the flash-forwards!
Your theories are great! [Laughs] And maybe they’re not so crazy! You’d be surprised what people are coming up with — some incredible reaches that require a lot of thinking. You’re not alone, Mike. [Laughs]