Clearly unaware that there’s no surer way to jinx yourself than to announce that you are invincible, the devil declared in Salem’s Season 3 premiere Wednesday that, with Mary pushing up daisies, no one could stop the “great terror” that he planned to unleash. So, of course, the next thing we knew, Tituba and the Essex witches were doing their damnedest to resurrect the late Mrs. Sibley. Did they succeed? You can probably guess. But read on, anyway, and we’ll go over the developments that stirred the cauldron, then you can grade the hour in the poll below.

‘THIS LAND IS MY LAND’ | As “After the Fall” began, the devil, holding court in the woods with various tribes of witches, informed Mary’s cronies from the Essex branch that he had no intention of rewarding them for conjuring him up by keeping his promise to give them a land of their own. (Which was sure to be hell on morale.) Meanwhile, Tituba learned from the late Petrus that “when you ate my eyes, you swallowed my vision” — meaning that his responsibilities were now hers. As such, she had no choice but to behold her — and Salem’s, and the world’s — grim “future under the dark lord,” and team up with her fallen mistress to take back the earth from this “shifting tapestry of infinite threats.” Step 1: Er, raise said fallen mistress from the dead. And, for that, she’d need help.

‘IF THIS IS YOUR LOVE, I HOPE NEVER TO SEE YOUR HATE’ | In Salem, the Mathers’ marriage was, as you’d rather expect it to, suffering after Anne shoved Brown Jenkins down Cotton’s throat. Things got so bad between the newlyweds that the reverend actually agreed with brother-in-law Sebastian that it was time for his corpse to be discovered in the forest! Later, Anne pleaded with the devil to spare Cotton, as her mother had sworn to, while Sebastian suggested that the preacherman was an “intolerable risk.” In the end, the devil did what all fed-up parental figures do and instructed the squabbling sibs to “love each other… or die.” 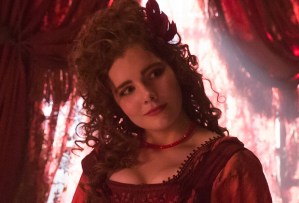 ‘THE NOOSE AIN’T AROUND MY NECK, IT’S AROUND SALEM’S’ | While refugees fled to Salem for protection from the French and Indians, John was apprehended for his past traitorousness and set to hang… until, that is, Isaac flipped the script and convinced the masses that his pal could protect them. The tide turning, Magistrate Hathorne reluctantly relented and offered Alden a deal: “Lead the militia, and I’ll clear your name.” In Knocker’s Hole, Mercy — looking fabtastic, BTW — was now running the local brothel, less to generate income than to ensure that she’d always have girls around to (cough) donate blood. Not that her hookers didn’t get anything out of the arrangement. Wide-eyed new arrival Alice, for instance, got an end brought to the drunken uncle who’d pimped her out in the first place.

‘THE FATHER OF LIES BETRAYED US ALL’ | After hauling Mary’s body to the Essex stronghold, Tituba convinced the sorceresses to ignore that fact that “you never know what you raise” when raising the dead, and help her resurrect their former leader. Back in town, John — in search of Cotton — confronted Anne over her decision to give his and Mary’s son to the Countess Von Marburg. In response, the young witch nearly choked him to death. Yet, since she argued that “everything I’ve done, I’ve done for love,” she later told her husband that she’d decided to trust him and restored his freedom. When he immediately used that freedom to sneak out of their house, he discovered that he hadn’t married a fool. Still within him, Anne explained as he keeled over in pain, was someone “far, far more trustworthy” than him. And “if you move or speak against me, Brown Jenkins feeds on your insides!” Now that’s putting the “mate” in “check mate.”

‘I HAVE NOTHING… NOTHING’ | Counseling Sebastian on his grief over Mary, the devil let him feel her spirit by giving him a taste of her blood — which he’d been drinking daily as a nightcap! But the dark lord’s idea of “comfort” was, predictably, not terribly comforting. At the end of the rap session, he reminded Sebastian that he “shall never know her lips again,” sending him running crying to (what was left of) the Countess. Later that night, the devil was visited by The Sentinel, freshly sprung from hell (as far as I could tell) and not in the least convinced that his “brother’s” plan was fool-proof. Finally, as John started with Sebastian what he intended to be a fight to the death, bam! Mary awakened!

So, what did you think of the Season 3 premiere? Grade it in the poll below, then hit the comments with a more detailed critique.