In what shall henceforth be known as the worst-kept Beyoncé secret since her “surprise” performance at the 2016 VMAs, the First Lady of Lemonade teamed up with the Dixie Chicks during Wednesday’s CMA Awards.

Rumors of the superstar team-up began swirling Tuesday evening, eventually flooding Twitter with all manner of “yasss!” and “slay!” by Wednesday morning. (Sure, there were a few naysayers out there, but TVLine is a safe space, so we’re choosing to look the other way.) 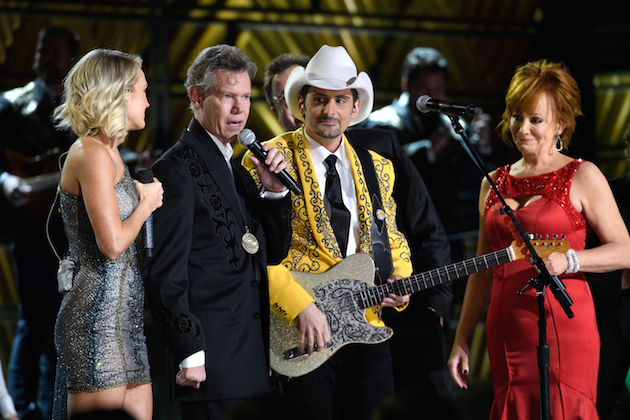 And just as it was foretold, Solange’s older sister joined the Dixie Chicks — Natalie Maines, Emily Robison and Martie Maguire — on stage towards the end of the three-hour event, performing “Daddy Lessons,” a track off Beyoncé’s latest album Lemonade. For good measure, they also threw in a bit of the Chicks’ “Long Time Gone.”

If you’re at all surprised by this collaboration, it might be helpful to note that the Dixie Chicks have been (expertly) covering “Daddy Lessons” on tour. And this isn’t the first time Beyoncé has unleashed her inner country crooner on TV, either — she joined Sugarland for a countrified version of “Irreplaceable” at the 2007 American Music Awards.

Check out part of the ladies’ performance below, then drop a comment with your thoughts. (Plus, grade it!)

Full video of Beyoncé performing "Daddy Lessons" on the #CMAs alongside the Dixie Chicks #CMAawards50 pic.twitter.com/UNqj9ePose