Well, this was a much better hour of Arrow than last week, eh?

With Rene captured and being tortured by a sadistic Tobias Church, Oliver & Co. went about trying to determine their colleague’s whereabouts. When Evelyn and Rory find blood at the location where Rene had been beaten, Felicity tracks a van that pulled away from that building — and feeds the location to Oliver.  Green Arrow arrives on the scene in time to save Rene, but Church gets away. (No arrow to the van tires? At least try!)  What’s more, the baddie escaped in possession of critical intel, courtesy of Rene — Arrow’s true identity!

While Diggle takes Rene under his wing and tries to help the new team member remember something else about his time with Church, Oliver enlists a friend of Dig’s — elite bodyguard Christopher Chance aka “Human Target” — to play “mayor.” In that capacity, Chance leverages a weasely councilman into caving on a rezoning ordinance, 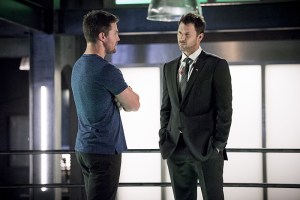 as well as takes many bullets from Church’s own costumed “freak,” Scimitar.

After we the viewers are looped in on the switcheroo/chicanery, Chance throws Oliver a bonus — the tidbit that Felicity is seeing new ACU recruit Billy Malone, as revealed to him during his day as mayor. That tees up a heart-to-heart on the loft balcony, where Oliver expresses not so much his disappointment in the news, but how he heard it.

“I’m fine, but hurt you didn’t tell me,” he shares. Felicity says she kept meaning to, yet repeatedly “chickened out.” Was she also in a way “keeping the door open for us?” he asks. “No, of course not…,” she half-heartedly answers. As for whether what she has cooking with Billy (impetuous nooners included!) is “real,” Felicity admits she doesn’t know.

When Rene, thanks to Diggle’s tactics, remembers a few cryptic remarks made by Church, the team deduces that something big is going down at an airstrip, at 4 am — so they (Spartan and Wild Dog included) meet up and clash with Church’s goons. (Christopher Chance even pitches in, masquerading as one of Church’s men.) It eventually comes down to Green Arrow versus Church, with the archer emerging victorious — but not before the gangster warns that something “much worse is coming,” a fella named Prometheus, “and he’s going to end you.” Church, though, is the one who is immediately ended, when the dark archer attacks his prison transport.

After apologizing to the city for faking his death, Oliver again confabs with Felicity, maintaining he wants her to be happy. As such, she owes it to herself to see if what she has with Billy is real — just as he will try to embrace whatever is next for him outside of the hood. “I will always care about you,” he reiterates. “It’s a mortal lock.”

Meanwhile in flashbacks, Oliver is welcomed into the Bratva brotherhood — though not so much by this one dude, Viktor, who has a few of his guys deliver a beatdown to their new member. Oliver is saved by some rando Russian — revealed only to us as Christopher Chance in disguise. Back in the present, at episode’s end, newshound Susan Williams gets a tip in the form of a photograph of “dead” Oliver Queen from five years  ago — living it up in a Russian watering hole, and certainly not sadly stranded on any island.

What did you think of “Human Target”?