And now a reading from the file marked “You Know You’re Getting Close to the Season Finale of American Horror Story When… ”: Going into Wednesday’s Roanoke, Matt, Agnes, Rory, Sidney and then some were dead; Audrey, Lee and Monet had been invited to be supper by the Polks; and Shelby and Dominic were caught between a shock (the real Butcher’s appearance on the front lawn) and a hard place (that damn haunted house). Which of them managed to survive “Chapter 8,” if only to die another day? Read on and find out.

ESCAPE OR DIE TRYING | As the episode began, Dominic and Shelby, reeling from The Butcher’s murder of Agnes and scared s—less that they were next, tried to escape through the tunnel under the house, only to be chased back by the Asian family that had died there. Still, Dominic wasn’t as ready to give up as Shelby was. (Maybe it was that promise of a spinoff.) Helpfully, Shelby insisted, “There’s nothing” that they could do to battle the supernatural forces at play. And, irksome as that sentiment may have been, it soon appeared that she was right. Not only did Piggy Man attack, but the nurses emerged, and a chandelier was dropped on Mrs. Miller’s ankle, Phantom of the Opera style. Holed up with Dominic in the bathroom afterward, Shelby wept that she had killed the only man she’d ever loved and then slit her own throat.

FOOD FOR THOUGHT | Meanwhile, at the Polks, Lee was learning from Mama and Jether that, during the Great Depression, the family had taken to feasting on their fellow man. When Lee protested that people don’t eat people, she was advised that the clan’s motto was, “If ya ain’t Polk, ya ain’t people.” Next thing she knew, she was missing an ear — taken as a future Christmas present. When Jether admitted to the captive that he’d been bummed he wasn’t on My Roanoke Nightmare like the rest of his kin, Lee promised to get him on Return to Roanoke if he’d help her. He could be bigger than Piggy Man, even!

Later, Jether explained to Lee that they didn’t kill her outright, they took her “sweet meats” bit by bit as per tradition, since once upon a time, keeping their food alive had been a way of keeping it fresh. Before Mama took a part of Lee’s shoulder, Jether offered her drugs to dull the pain, and her number about to be up, anyway, the addict accepted them. By and by, she asked to speak with Flora one last time, so Jether filmed her confessing to murdering Mason. “I just want you to go on,” she told her daughter, “without the weight of lies and doubt.” When Lee learned that she was to be Jether’s first kill, she managed to get him randy enough to release her — thus allowing her to (as far as I could tell) kill him. 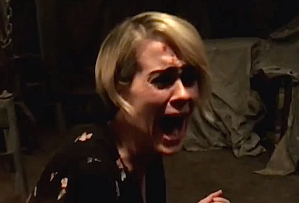 ART INFURIATES LIFE | Elsewhere at the Polks, Audrey and Monet explained to some of Jether’s charming relatives that they were just actors, the real Matt and Shelby had taken away their feral boys, not them. Nonetheless, the hillbillies were intent on pulling Monet’s teeth. Thankfully, she managed to escape — but left Audrey behind. As the fellas went after Monet, Mama began pulling Audrey’s teeth. Before the Brit was all gums, Lee knocked out Mama and released Audrey, who put a bloody end to the Polk matriarch. Upon making her way back to the Millers’ former house with Audrey, Lee was horrified to discover Matt’s remains. In turn, Audrey was horrified to discover Shelby’s remains. “I feel like part of me has died with her!” cried Audrey, making it about herself.

Though Dominic told the women that Shelby had murdered Matt, then offed herself, they didn’t believe him, and locked him out of the suite to be done in by the Piggy Man. The morning after, Lee informed Audrey that they had to go back to the Polk farm to get rid of the video of them killing Mama Polk. (Of course, what she really needed was to destroy her confession to Mason’s murder.) Leaving the house, they came face to face with what at first they thought was the Piggy Man. “Dylan?” asked Audrey. And that was that.

So, what did you think of “Chapter 8”? Bets on the last character standing? Hit the comments.