This Friday at 9/8c, CBS’ Hawaii Five-0 celebrates 150 episodes with an hour that finds team leader Steve McGarrett (played by Alex O’Loughlin) unexpectedly reunited with both his mother Doris (Christine Lahti) as well as his almost-fiancee Catherine (Michelle Borth).

The set-up: Having skipped out on Steve for top-secretive reasons at the start of Season 6, Catherine resurfaces from out of the blue with news of Doris’ capture and imprisonment at a CIA black site. Alas, Catherine drops this bombshell right in the midst of her ex’s very cozy evening of “romance and fine dining” with current girlfriend Lynn (Sarah Carter) — who goes on to share perhaps a bit too much with her predecessor. (Blame the wine?) Regardless, a thrilling rescue mission ensues!

Elsewhere in the milestone episode, Chin Ho awaits word on his latest effort to stall niece Sara’s adoption, while Grover enlists his son for an “intelligence gathering” op, while Danny is out of town tending to his hospitalized father.

Here, the extremely candid Alex O’Loughlin shares with TVLine a preview of No. 150, reflects on the 149 episodes leading up to it and teases his current timetable for turning in McGarrett’s badge and gun. 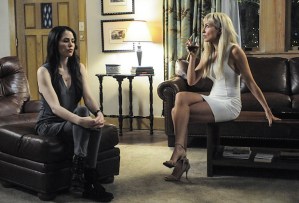 revealing too much, the cold open to this episode is so deliciously awkward.
With Lynn and Catherine? Yeah…. Yeah, it’s funny.

TVLINE | I almost felt like Steve wanted to run away upstairs and just let them sort things out.
Most definitely. And he kind of does! For most of the rest of the show, he kind of does.

TVLINE | How are things going to be when Steve lays eyes on dear old mom?
Oh, she’s a pain in the ass, man. [Laughs] You know, it’s an interesting thing because if this actually happened to you — if you were Steve McGarrett and you had this experience with your mother where she disappeared for 20 years and faked her own death and lied to you continually and then came back and made you promises and didn’t keep them and left again —at what point do you sort of give up? And if you don’t give up, what does that look like? These are all questions I have to think about while I’m playing these scenes. So, what’s it going to be like? It’s going to be filled with different emotions, but it’s also funny. They’ve gotten to a dynamic where they just frustrate each other!

TVLINE | We also get 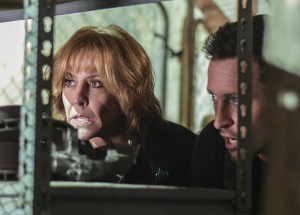 flashbacks where you see how things were very warm between them for however many years she was in his life as a kid. That sticks with a person, regardless.
Right. Look, I’ve got little kids, and it’s so critically important the way we raise our kids and that we don’t f–k them up. There are so many damaged people in the world and a lot of that is because their parents didn’t do a good job. It’s really easy not to do a good job, and sometimes you can not do a good job and not even realize it, so you’ve got to be careful what data you sort of download onto their clean little hard drives. It’s a delicate balance. Doris is a basket case, and as a result of that, Steve carries a lot of baggage about that woman.

TVLINE | Looking back over these first 150 episodes, what’s been the most difficult scene for you to do physically?
I don’t know how to answer that question; I’m all f—ked up, man. I mean I’ve blown both shoulders, one knee. I’ve had my elbow tendon reattached. I’ve got bulging discs in my neck and my back. I don’t know where to start. I’m a mess, and a lot of it’s been really, really hard. I think back to when I was doing most of my own stunts in the first few years — that was not a great idea. But the physical exhaustion of working with injury and working huge hours day after day, year after year…. The whole show has been extremely 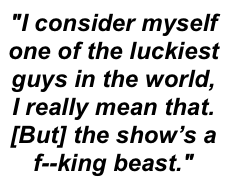 physically daunting. That’s one of the things I’m trying to figure out at the moment now; I don’t know how much longer I can do it.

TVLINE | You recently hinted at your intention to exit Hawaii Five-0 after any potential Season 8. (Season 7 is currently up in the ratings vs. last year.) Is that still your plan?
Absolutely. I’m just trying to make it through the end of [Season] 7! [Five-0] is really, really wonderful, but it is an action show, I’m the main guy, and I defy anybody to do what I’ve done for as long I’ve done it and hold out the way I have. Dude, I was a fit, strong, healthy guy when I started the show, and I still am, but you sustain what you sustain. It’s part of the gig.

TVLINE | And what has been the most difficult scene for you to do emotionally?
That’s a really good question. Once I finish an episode, I put it out of my mind so that I can move on and retain new information, but the 100th episode [where McGarrett got waterboarded] was really hard. We had a medic standing by, and I set it up so I actually let them waterboard me and I thought it would be interesting, but I got really sick with pneumonia after that. I had to kind of “go there” with some of the emotional stuff about my dad, so I tried to sink my teeth into that one. Yeah, I really felt depleted after that one. 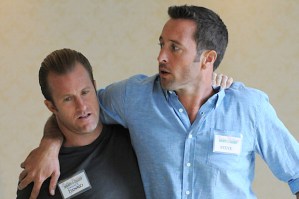 sadly wasn’t available for Episode 150, but [showrunner] Peter Lenkov has told me that you two absolutely love doing the bickering “McDanno” scenes.
I mean, it comes pretty naturally. We’re both argumentative and opinionated, so it’s easy to yell at each other. But it’s also one of the first aspects that came out of our characters in the pilot, in the first read-through of the pilot script. We don’t back down from one another, so when we get that stuff, we know it’s fun and we know how to play it. There are certain things that they write that work really well with us — like when we have to go to therapy — and we actually have fun when we do it because not all this stuff is fun. Like, standing around a Surface table and spouting exposition for days and days is not a fun aspect of the job. It’s just sort of information, you know. But that [McDanno] stuff is fun.

TVLINE | Five-0 is obviously more commercial fare than Moonlight, but for an actor, does getting to do 150 episodes of something soothe the sting of the occasional one-and-done, 17-episode series?
For sure. Look, don’t get me wrong, 150 episodes of the show is an extraordinary feat, it’s a testament to every single person that works on the show. It’s a miracle that a show gets picked up at all, but to go this long is fantastic and I consider myself one of the luckiest guys in the world, I really mean that. It doesn’t make it any easier to do the show — the show’s a f–king beast— but it’s incredible that we’ve been able to give jobs to hundreds of local people for seven years. We’ve been able to entertain millions of people for seven years. We’ve been able to keep telling these great stories. So yeah, it goes far above and beyond soothing the sting of the show that doesn’t get a Season 2. I’m glad it all happened the way it did.