Lucifer‘s Halloween Night outing was full of treats (Maze taking Trixie “for a walk”) and tricks (namely a final scene that would seem to mark a turning point for one character).

Fresh off killing his brother Uriel, Lucifer spent much of this week’s episode on a rip-roaring bender, doing whatever he could to offset his supernatural metabolism with plenty of booze (and babes). This left Chloe confounded, having never seen her partner in crime-solving so unfocused. On top of that, Chloe had a Halloween emergency to contend with, when Maze (and her toys) accidentally scared off the babysitter. At Trixie’s suggestion, Chloe asked Maze to take her daughter trick-or-treating — which the demon did with gusto, eyeballing neighbors until they ponied up plenty to “the President of Mars” and even wowing Trixie with her makeshift “costume” (aka her real, half-gnarly face).

Elsewhere, Charlotte tried to help Amenadiel deal with the chain of events that have unfolded since her arrival on Earth, up to and including Uriel’s death. To do that, she led him to where Lucifer had buried their brother, urging him not to hold himself, but her, accountable. She also avowed that his father (Father?) would be proud of who he has become and what he has accomplished. Their scenes seemed to be leading somewhere quite specific… but we didn’t get there just yet.

Lucifer’s guilt-ridden antics came to a boil when, in the course of helping Chloe catch her killer, he begged the sniper — repeatedly — to shoot him instead of his next mark. 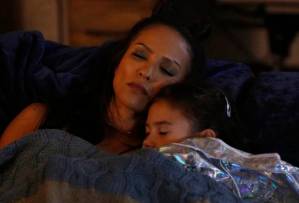 And yet Lucifer came away unscathed, due to the killer’s “code.”

At episode’s end, while Chloe came home to find Trixie and Maze zonked out after a busy afternoon of trick-or-treating, Lucifer had a session with Dr. Linda, where he went on and on about his role in Uriel’s death, Azrael’s dagger and what not. Fed up with his “metaphors,” Dr. Linda demanded that Lucifer once and for all be honest with her about who he is. And that he did, revealing his true, blood-red, veiny, eeeeeevil countenance to her — leaving the good doc speechless, a bit blubbering, and maybe even petrified.

What did you think of the episode “Monster”?