You can still call her Jane… but you can’t call her a virgin anymore.

After two-plus seasons of waiting, the heroine of The CW’s Jane the Virgin finally handed in her V-card on Monday’s episode, as Jane and her new husband Michael consummated their nuptials with a passionate night in their new home. (C’mon, Jane’s already had a baby and gotten married… this was long overdue, right?) 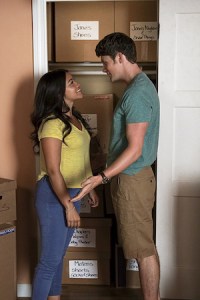 But first, the newlyweds had to endure a little more waiting. The Narrator teases us at the start with a title card reading “2 Days Earlier” and the sound of Jane and Michael grunting and moaning. (Jane even yells out, “Be gentle with my box!”) But it’s not what you think: He’s just helping her pack up her stuff for their big move-in together. They’re still staying chaste, since Michael’s doctor told them last week he can’t have sex while he’s recuperating from his gunshot wound.

After getting the green light from Michael’s doctor to do the deed, though, he and Jane sprint to their new house — “Trust me, it’s not gonna take long,” he promises her in the elevator — only to find Rogelio and a team of interior decorators already there, ready to revamp the place. Michael suggests that he and Jane take it out back to the shed, but Jane’s not that desperate: “I am not having sex for the first time in a shed!”

They wait patiently for the decorators to clear out, but then Xiomara and Alba barge in to interrupt, and Jane and Michael agree to try again later on, after Jane works on her writing thesis. (Jane is interviewing Alba for her romance novel, using the webcam on her laptop.) That night, Jane and Michael finally find some alone time and hop into bed together. 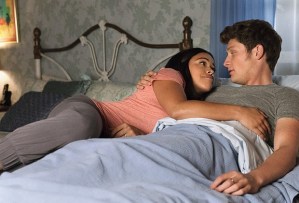 She admits to being a little nervous, but he reassures her: “I want it to be perfect, for you.” They exchange I-love-you’s, and then… it’s happening! The Narrator pops in to say, “Friends, I can’t show you what happened next, but…” And we see a cartoon rocket ship with Jane and Michael inside blasting off into the sky. Must’ve been great, right?

Well, maybe not. Because afterwards, when Michael asks Jane how she feels, she says, “Good! I feel good.” But she’s not very convincing. She later confesses to Lina that she faked her orgasm so she and Michael could finish at the same time. She tries to spice things up with him by donning blue lingerie and whipping out some “Sexy ‘n’ Wild Gel,” but that goes horribly wrong, too. (Jane: “It feels like wasabi down there!”)

Plus, she has a more embarrassing problem to deal with. When Jane opens her laptop, she realizes that the recording of Alba she sent to her writing advisor is actually… a sex tape of her and Michael’s first time! (She accidentally sat on the computer and turned on the webcam before things got hot and heavy.) The professor is a little scandalized, but she also thinks that Jane’s virginity explains a lot: “That’s what’s been missing from your writing. Romance without sex is just… fantasy stuff.”

That’s when Jane tries to get in touch with her inner seductress — helped by a vision of Alba’s deliciously evil sister Cecilia, also played by Gina Rodriguez — and rev things up with Michael. But nothing works, and Jane decides to stop pushing when a nun version of Cecilia reminds her, “Sexual pleasure is not the most important thing. What’s important is the connection between two souls.”

Michael storms off when he finds out Jane told Lina about their sexual problems, and Jane cries to Xiomara, feeling conflicted about losing her virginity. (“Like I lost something… like a part of my identity.”) Xiomara tells her that she actually gained something, though: “You’re just starting out. You’ll get there.” Jane comes home and hears Michael listening to porn — but he’s really watching their sex tape, trying to analyze where he went wrong. Together, they find things on the tape that Jane actually liked… then the cartoon rocket ship heads back into orbit. And this time, Jane’s afterglow looks authentic.

Give us your reaction to Jane and Michael’s big night in the poll below, then hit the comments to discuss “Chapter Forty-Seven.”