The following recap, by the very definition of the word “recap,” contains massive spoilers from the Season 3 finale of FX’s The Strain.

Congratulations, Zach Goodweather. Because in a highly competitive field, you — with one flick of a finger during a temper tantrum — have clinched the title of Worst TV Kid Ever. (And yes, the trophy italicizes “Ever”; we paid extra for that.)

As FX’s The Strain brought Season 3 to a close on Sunday, Setrakian, Fet, Dutch, Quinlan and Eph plotted to capture and dispatch with The Master once and for all, by luring him up to the Stoneheart HQ, neutering him with their nifty “jammer” and then wrestling him into the coffin they had lined with silver.

The Master, though, still had a trick or two up his sleeve, using his armed forces to take out Eldritch Palmer’s security detail and then granting the old man what he had originally, desperately coveted — “eternal life,” by transferring his milky, wormy essence (and a mouthful of soil, blechh) into his onetime stooge.

“Eldritch” then used the white to restore Eichorst’s mutilated, barely living body to full health, after which Kelly helped the German to a proper make-up job. Eichorst gave Kelly (and an “Oooh, cool beans!” Zach) a 10-cent tour of the nuclear bomb he was putting in play, leaving the detonator with Kelly, to relay to The Master.

“Eldritch” met up with Setrakian and Eph at Stoneheart, but he didn’t leave them fooled for long. Rather, within moments he let slip his true, raspy voice, sending the two heroes into attack mode. The doctor and the professor barely fended off The Master, while Dutch on the level below fiddled with the glitchy jammer, until it finally powered up and stymied the strigoi leader. Even with that assist, Eph and Setrakian couldn’t quite get the job done, but Quinlan showed up to get in some solid licks against his old foe, finally heaving The Master up and into the coffin. Fet then slammed closed the lid, readying the box for transport to the docks, and then the bottom of the Atlantic.

Except… Kelly promptly perceived that her “transmissions” from The Master had been cut off. Without his voice/Don’t Turn Zach directive in her head, Kelly started toward her son, her pinchers flicking, but Zach was able to ward off her urges. Instead, the lad suggested they go upstairs to find The Master — only, they ran into Eph instead. Kelly charged at and tackled her husband, leaving Eph no choice but to ultimately and fatally drive a dagger up and into her noggin. 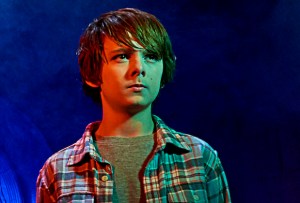 Zach, horrified and continuing his tradition of never knowing better, flipped the eff out — and then flipped the switch on the detonator he had grabbed!!!

Cut to Setrakian, Fet, Dutch and Quinlan down by the docks, looking on with confusion and horror as the Statue of Liberty exploded, sending shockwaves across Lower Manhattan that — among other things — knocked the coffin out of their grasp and off crashing into the distance. Once the first dust settled, their worst fear is confirmed: the box is empty, The Master MIA.

Back at Stoneheart, Eph stumbled out of the building, shouting his (horrible) son’s name — while elsewhere, Eichorst happened upon the kid, delighted to discover that it was he who triggered the bomb, making things “well” again for the strigoi. Indeed, as Setrakian realized, looking up at the fallout-clouded sky, the occultation is happening, obstructing the sun for the short term and allowing the munchers to roam free, and with abandon, as the humans race underground to avoid irradiation….

What did you think of the series’ penultimate finale?