It’s not a fourth season, Happy Endings fans… but it was pretty ah-mah-zing just the same.

The cast of ABC’s cancelled-too-soon sitcom reunited at Entertainment Weekly‘s EW PopFest in L.A. on Saturday, and they weren’t just there to reminisce. The actors did a live table read of a brand-new “lost episode” of the show, penned by creator David Caspe and the original writing staff. (The show still isn’t coming back, so this live read was the only way to enjoy this last slice of Happy Endings.)

All six main cast members — Casey Wilson (Penny), Adam Pally (Max), Eliza Coupe (Jane), Damon Wayans Jr. (Brad), Elisha Cuthbert (Alex) and Zachary Knighton (Dave) — were on hand for the table read, along with Caspe and the show’s producers and writers. And they were reuniting for a good cause: Happy Endings script supervisor Tracy Scott passed away from cancer earlier this year, and the cast and crew donated their fees to the Susan B. Komen Breast Cancer Foundation in her memory.

Before the reading, Caspe marveled at the packed house of devoted fans, joking, “I wish there were enough of you to have watched the show originally.” (Ouch. Too soon.) To start off the “lost episode,” we watched a clip from the very end of the series, with the six pals dancing together at Alex and Jane’s sister’s wedding. But then we saw an ominous title card: “3 Years Later…” It turns out the friends haven’t even been in the same room together since that fateful dance.

So what have these crazy kids been up to for the past 939 days? Let’s catch up with each of them, per the script for Episode 401, “Happy to Be Here”: 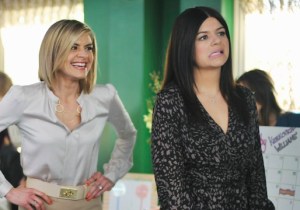 PENNY | The episode opens with Penny happily cooking in a beautiful kitchen with two kids playing at her feet. Did she finally find love? No, it turns out she’s just loitering in a Williams-Sonoma demo kitchen. She’s thrown in mall jail and tries to bond with some teen shoplifters: “I love your hair. What’s Snapchat?” Later, she reveals she’s been married three times in the past three years, “all on Kid Rock cruises.”

MAX | Penny’s BFF bails her out of mall jail and tells her he moved to D.C. and he’s been “just clowning around” — meaning, he’s one of those guys who’s been hanging out in the woods dressed as a clown. (“The hours are long, but the pay is bad.”) Max reveals to Penny one of their friends is… dead! But it’s not one of the core six: It’s Scotty. (Penny: “Who’s that now?”) You remember Scotty: the tall, scuzzy guy who often hung around, and tried to scam, the gang. He was last seen “wakeboarding with Brendan Dassey.”

ALEX | The dummy of the group must be a smart businesswoman, because she somehow turned her always-empty Xela clothing boutique into “a Fortune 500 global lifestyle brand.” Penny and Max find her in London, where she reveals that Jane is in Japan working for Toyota… which Alex thinks is a toy company that makes action figures of “that tiny green Jedi master from Star Wars.” So: Toy-Yoda. (Oh, Alex.)

JANE | We find out that the gang originally split up due to a huge fight between Jane and Brad at the wedding. (She threatened to “grab [him] by the pussy”; he countered that she’d only get “a handful of Django Uncut.”) Jane fled to Japan to take that job with Toyota (not “Toy-Yoda”), and Alex arrives to talk her into a reunion — only to find Jane trying to make out with her. Turns out that wasn’t actually Jane, but just one of her identical “sex robots.” “If you rise to the top of almost any Japanese company, you end up in their sex-doll division,” Jane explains.

DAVE | The V-neck lover has been driving his food truck across the country, Max says, “retracing Jon Favreau’s road trip from Chef.” He’s now sporting “a tiny Lin-Manuel Miranda beard” and a man-bun (of course), and he’s working on a hip-hop musical called Hamilton… about champion ice-skater Scott Hamilton. (Yeah, he wasn’t aware of the other one.) 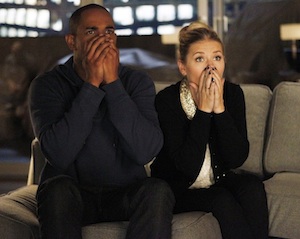 BRAD | The fight with Jane drove Brad into the wilderness, where he’s been living off the land. They find him in the woods, sporting a bushy white beard. (Max: “You look like the photo negative of a rabbi.”) He blames it on a violent encounter with a family of bears: “They took turns Revenant-ing me, for what felt like years… they eventually stopped to give their cubs a turn.” He still found a way to get Wingstop out there, though.

Alex lies to Jane and tells her Brad, not Scotty, was the one who died, so she’ll actually come home. And Dave drags Brad out of the woods, leading to a Jane-Brad meeting that quickly goes from hostile to steamy, with them finding a room to, um, reunite in. Then we find out… Scotty’s not really dead! Alex just conspired with him to fake his death to get everyone back together. Except: In attempting to fake his own death, Scotty actually did die. (RIP, buddy.)

The episode ends with Dave waking up next to Alex and revealing… the entire series was a dream! It’s the night before their wedding (the one from the series premiere): “Then a bunch of super weird stuff happened, but everyone was talking so fast, it was hard to follow… and Penny’s assistant was Jane the Virgin!” Alex reassures him that it was all a dream. But him saying that, in the dream, she left him at the altar for a dude on rollerblades does plant a seed in her head…

* The best surprise of the night: an appearance by Stephen Guarino, who played the gang’s fantastically gay acquaintance Derrick. Now the only word Derrick can say is his trademark “Drama!” like Hodor on Game of Thrones. And we learn why: As a kid, Derrick was traumatized when his mom forced him to draw nude drawings of her. “Draw” + “Ma” = Draaaaaamaaaaa!

* Max, when he finds Penny in mall jail: “You’re wearing a pajama-jean pa-jumpsuit.”

* Penny, when she thinks she missed Scotty’s funeral: “I was supposed to sing ‘Torn’! Apparently, Scotty’s head was torn off his body by Brendan Dassey’s Sea-Doo.”

* Before they remember Dave, Max recalls a Halloween when the five of them dressed up as “the Central Perk Five… the one where Monica, Phoebe, Rachel, Chandler and Joey get falsely accused of ‘wilding.'”

* Things get meta when Alex wonders why they ever stopped hanging out: “It’s like one day we woke up and our friendship was just… cancelled.” Dave: “For no good reason!” Penny: “I mean, who can remember the ABC’s of what actually happened?”

Funniest line from the Happy Endings reunion? Hit the comments and give us your favorites.