This Sunday at 8/7, ABC’s Once Upon a Time is heading 20,000 leag—, er, many fathoms under the sea, as Hook crosses paths with another famous seafarer — while in present-day Storybrooke, the pirate grapples with his decision to deceive Emma, by holding onto the magical shears with which she might ultimately excise her Savior status.

“He loves Emma and is obviously very concerned for her. That’s his whole reason for keeping them,” Colin O’Donoghue explains to TVLine. “He sees this as a way that he can protect her and save her from dying,” should she choose to abandon her role as a seemingly damned Savior.

“Hook knows that deep down, he’s sort of betraying her,” the actor continues, “but he’s doing it in his mind for all the right reasons — much in the same way that she kept him alive when he said he wanted to die, in Camelot, rather than become the Dark One.”

As Hook conceals his guilt, he will flash back to his first boarding of the Nautilus, the submarine helmed by Captain Nemo (played by American Crime‘s Faran Tahir), as revealed in the exclusive sneak peek below:

“Nemo wants to try to enlist his help for something. And Hook being ol’ Hook, it’s very difficult to get him to go anywhere without forcing him to do it!” his portrayer observes with a laugh. “That’s why he is brought there at harpoon-point.”

Once properly introduced, the two captains arrive at “a weird sort of mutual respect,” O’Donoghue previews. “Hook, who at that point [in his life] is quite a selfish person, sees that Nemo has a way about him that he respects. So he ultimately wants to ‘honor his wishes’ in a sense.”

As for these flashbacks’ overall purpose, “There is somebody on Nemo’s crew that Hook has a history with,” O’Donoghue teases, “and that speaks to the bigger picture of why the Nautilus and Nemo are on the show.”

Meanwhile in Storybrooke, Hook’s complusion to keep a secret from Emma could not have come at a less opportune time, given the to-Hell-and-back strides they have made in their relationship, most recently culminating in the decision to live together. “It’s something that will weigh on him quite heavily, but he’s doing it so that he has a ‘get-out clause’ for her if worse comes to worst.”

Whether or not this deception marks a longterm setback for Hook and Emma, O’Donoghue has been quite pleased with Killian’s growth since first crossing paths with the Storybrooke heroes, especially as he does what he can to right his (many) past wrongs. Case in point: the olive branch he recently extended to Belle, who on more than one past occasion was assaulted by the pirate.

“For this version of Hook — 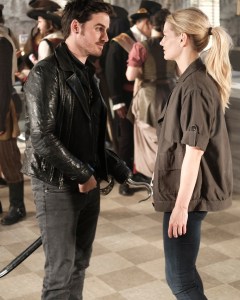 Alas, such developments are cold comfort to the “Captain Swan” fans who for so long have hoped for a truly happy ending, and now must sit and wait to see if Hook’s lie sinks their ‘ship. To that fretting following, O’Donoghue can only offer this: “If you watch on Sunday, you’ll see how things come to a head… and perhaps get resolved.”