Even married paralegals still dream of being a princess… as this week’s Crazy Ex-Girlfriend proves.

In this exclusive sneak peek at Friday’s episode (The CW, 9/8c), Rebecca’s office pal Paula (Donna Lynne Champlin) finds her inner Snow White to sing “Maybe This Dream,” a Disney-like number where she hopes her new dream of going back to law school won’t disappoint her like all her other dreams have. (“Maybe this dream won’t poop on my face/Like a seagull at the beach…”)

Champlin tells TVLine the song came as a surprise to her: “I never dreamed that they would give Paula, and me, a bona fide princess number.” She also gets to show off her classically trained soprano voice here, which she says takes people by surprise: “Women who look like me, we look like belters. I’ve always been a soprano in an alto’s body.” 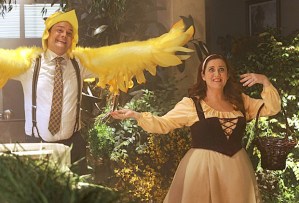 Getting a chance to play the princess for once filled the Broadway veteran with immense gratitude… and emotion. “Every step of the song made me — the girl in me that always wanted to be a princess, but would never dare admit it — just start to release emotional baggage,” Champlin says. “I went to the taping with the orchestra… and I started to cry. Then I went to my costume fitting. Cried. Then I went on the set. Cried. I literally spent the whole process with every department just crying. Because it was such a gift, you know?”

In the “Maybe This Dream” video, Paula cheerfully strolls through the Whitefeather & Associates law office, which has been transformed into a lush forest, complete with singing birds. “All of that greenery, that was real,” Champlin reveals. “None of that was plastic.” But the set design did lead to some body-temperature issues for her, she admits. “We had all that smoke, which of course made me feel freezing from the knees down. But from the knees up, it was literally like being in a tropical jungle. It was very humid, and very pungent… I was sweating as if I was in the Amazon.”

Paula’s new dream, as we learned in last week’s premiere, is to go back to school and become a full-fledged lawyer — a dream she’s held onto for years, Champlin says. “This was a dream of hers when she was in college, and she abandoned it because she became pregnant… she left law school and got married. So she’s doing something for herself for the first time since she made that huge decision to give up her dreams.” 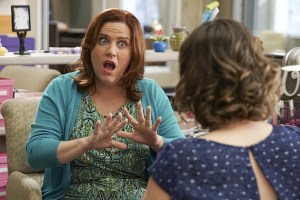 Up until now, Paula’s been spending a lot of time as a co-pilot on Rebecca’s crazy romantic schemes, but she put a stop to that last week with a strictly worded “friendship contract.” So how do Paula and Rebecca go forward from here? “In any relationship, if you set a new boundary, there’s going to be an adjustment phase,” Champlin says. “Plus, Paula’s going to law school, and she’s going to be exposed to a whole new world of people. Her world is expanding… the friendship goes through a transition, but that’s part of the journey.”

One part of the journey we know is coming up: a guest spot from theater legend Patti LuPone, who’ll play a person from Rebecca’s past who she runs into during a hometown visit. Champlin and LuPone actually co-starred together on Broadway in Sweeney Todd, so of course Champlin is thrilled to welcome her old friend aboard the Crazy train. And the feeling is mutual, Champlin says: “She’s such a huge fan of the show. Patti’s like, ‘It’s like Off-Broadway with a budget! I love it here!'”

Press PLAY on the video above to watch Paula’s big number “Maybe This Dream,” then hit the comments to share your thoughts.