As acclaimed as it was, Mad Men was never a breakout ratings hit — which makes it all the more strange that so many ’60s-set clones have popped up since its debut. First came NBC’s The Playboy Club and ABC’s Pan Am, both cancelled after a single season. And now comes Amazon’s newsroom drama Good Girls Revolt (debuting this Friday), which unfortunately is closer in quality to those two misfires than the original. It gets the period clothes and music right, but forgets to include any of the insight and emotional complexity that made Mad Men great.

The year is 1969, and we’re swept into the busy newsroom of News of the Week, a weekly print magazine in the mold of Time and Newsweek. Despite all the generational change swirling outside, the office is still starkly divided along gender lines, with female researchers like Patti (Backstrom‘s Genevieve Angelson) doing all the legwork and male reporters like her boyfriend Doug (Weeds alum Hunter Parrish) getting all the published credit. (The women are even literally seated lower than the men, in a sunken sublevel of the office referred to as “The Pit.”)

With the help of ACLU lawyer Eleanor Holmes Norton (Parenthood‘s Joy Bryant), though, the women begin to recognize the injustice of their situation — and band together to file a landmark sexual-discrimination lawsuit against their bosses. The show’s premise couldn’t be more timely, with the wage gap still an issue and one of our presidential candidates declaring war against “nasty women” everywhere. And the hustle and bustle of a magazine newsroom is a smart place to set a TV show, with new storylines streaming in each week. 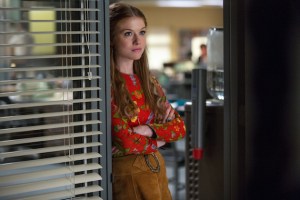 But instead of immersing us in what it felt like to actually live through the 1960s, Good Girls Revolt looks back with all-too-perfect hindsight. In the pilot, Patti is chasing a story about the infamous concert at Altamont, and she immediately grasps what a watershed cultural moment it will become, even as it’s happening. Vietnam and Charles Manson are name-dropped with thudding self-importance. It’s reminiscent of the worst aspects of The Newsroom, where our heroes were always magically on the right side of history.

And despite the cast’s best efforts, Revolt‘s characters are flat symbols, rather than three-dimensional human beings. Patti is the free-spirited hippie who blasts “In-A-Gadda-Da-Vida” in the newsroom. Jane (Anna Camp, wasted here) is the prissy virgin who blanches at any hint of sex talk. Editor Wick McFadden (Jim Belushi) is the blustery old relic who still worships Eisenhower. Everyone says exactly what they’re thinking, with no room for nuance or ambiguity. Patti actually complains to her boyfriend in the pilot, “I want to tiptoe through the tulips. You want to put me in a box.” Sure, she might think something along those lines… but would she really say those words out loud? 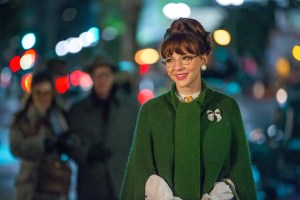 The most intriguing, and least stereotypical, character here is photo caption writer Cindy (Love & Mercy‘s Erin Darke), a giggly introvert who’s looking to break out of her dull marriage. There’s potential for her storyline, thanks to Darke’s appealing performance, but it gets drowned out by obvious dialogue and history-book milestones. And the show’s main hook — the sex-discrimination lawsuit — doesn’t really get going until the third episode, so Revolt ends up feeling like a two-hour film that’s been artificially stretched to last a full season.

Amazon clearly sank a lot of money into this show: The period detail is impressive, and all the iconic ’60s songs on the soundtrack had to be expensive. (Although they’re too obvious as well. The pilot actually ends with the Zombies’ “Time of the Season.” What, was the Byrds’ “Turn! Turn! Turn!” not available?) But it’s a lot of money spent in service of a show that’s not very good. It’s well-intentioned, but Mad Men already chronicled this era with much more skill and subtlety. After this, can we just set fire to all the tie-dye and declare the ’60s off-limits for a while?

THE TVLINE BOTTOM LINE: Good Girls Revolt has a quality cast and a timely message, but it’s short on complexity and character depth.