At this summer’s TCA press tour, the cast and creatives of CBS’ The Great Indoors (premiering Thursday at 8:30/7:30c) were taken to task for mercilessly mocking the “millennial” generation in at least the pilot, the only episode available for review at the time.

Community grad Joel McHale — who stars as Jack Gordon, a renowned adventure reporter brought in from the cold to shepherd an outdoor magazine’s young, online editorial staff — countered that the workplace sitcom is “not just jokes about SnapChat. It is about generations,” 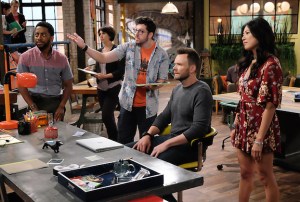 and as such will mock all age groups, including that of Stephen Fry, who plays Jack’s mentor.

Indeed, the second episode does flip the script and land Jack in the crosshairs, as the Outdoor Limits staffers ridicule and then revamp the swaggering adventurer’s previously nonexistent social media profile (shirtless pics out! muffin pans in!) and lead him into the app-based dating scene.

As you might surmise, McHale is in familiar waters with The Great Indoors, wielding sarcasm like a pro as Jack takes the wind out of the sails of his undeservedly self-entitled underlings, a group raised on participation trophies and content to podcast about… each other’s podcasts. (Though none of the Outdoor Limits staffers exhibits Britta Perry levels of righteousness, Jack finds plenty to poke fun at.) Unlike Jeff Winger, Jack is somewhat amendable to self-improvement suggestions, though not before all but dying on his hill of choosing (e.g. 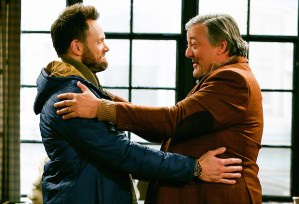 Was the hottie who swiped right for him actually out to steal his identity?).

Among the supporting cast, Christopher Mintz-Plasse (Superbad) stands out as Clark, a bit of a Jack Gordon fanboy with precious little outdoorsman aptitude to show for it, while Christine Ko finds some fun, sassy line deliveries as Emma, the staff’s social media “influencer.” Shaun Brown’s Mason is still being defined two episodes in, while Susannah Fielding — an almost uncanny hybrid of Emily Blunt and Alison Brie — has potential as Jack’s love interest, once they give her any character trait beyond “his onetime hook-up now adorably in love with her (longtime, ha!) fiancé.”

As Jack’s pal Eddie (a Chicago bar owner who’s more than happy to charge hipsters $6 for a can of PBR), Chris Williams offers a refreshing break/hangout away from the website workplace, while the aforementioned Stephen Fry is always, always welcome, here playing Outdoor Limits‘ charismatic, whiskey-loving and slightly goofy founder.

Coming off a decent if not remarkable pilot, the second episode is frankly a bit on the nose with its theme of “Hey, Let’s Show the Unplugged Older Guy How Technology Works!” But Joel McHale is pretty bulletproof in my book, and if The Great Indoors can maintain a balance of smart, and not tired, barbs lobbed between “the human version of dial-up” and the “stupid twentysomethings” with whom he must now work, there surely is a show here.

THE TVLINE BOTTOM LINE: The Indoors are good, not great.