Warning (for the two of you left who haven’t watched or gone online since Sunday night): The following contains spoilers for the Season 7 premiere of The Walking Dead.

Though the Season 7 premiere of The Walking Dead was hard as hell on us viewers, Michael Cudlitz took it — and Abraham’s fate — like a champ. So he was in good spirits Monday when, during a conference call with reporters, he revealed how long he’d known that his character would be dying along with Glenn, how he supported castmate Steven Yeun and how he went the extra mile to keep secret the identities of Negan’s victims.

TIME OF DEATH | The veteran actor “found out about a year and three months ago” that Abraham was toast, he said. “We filmed the scene about a year ago… so Steven and I have been sitting with [this knowledge] for about a year now.” 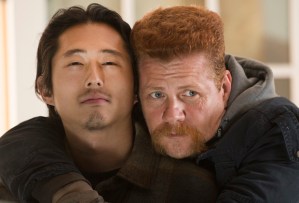 CAN YOU KEEP A SECRET? | Cudlitz and his colleagues sure can. “We spread a rumor that… they filmed everybody’s death scene just in case [contract negotiations went badly],” he chuckled. “All of that was a lie.” About the only people he let in on the secret were his wife and kids. “It would be kinda strange just sleeping in every day in L.A.,” he joked, “when I’m supposed to be in Atlanta [shooting the show].”

THE EXTRA MILE | It wasn’t just the media to whom Cudlitz and Co. told tall tales. “Everywhere I went, I would tell people I was leaving in two days, or I’d just gotten back,” he said. “I went to the guy [in L.A.] who cuts my hair and got my hair dyed, and he said, ‘Aren’t they doing it on the show anymore?’ I told him, ‘If I do it here, I get to stay home an extra day'” with the family.

HIS LAST SCENE | An old pro Cudlitz may be, but shooting Abraham’s death still took a toll. “This is a family, and you’re saying goodbye to people you enjoy working with,” he said. Still, “I have zero regrets.”

HIS SOUVENIR | “I’m gonna keep the mustache for a little while,” the actor said. “I have a really big fan event coming up soon, and it’s kind of a way for the fans to say goodbye. For people who don’t follow the show really closely, that might sound ridiculous, but it’s not. The fan connection with us is very strong.”

SHARING THE SPOTLIGHT | Since Glenn’s death is such a major turning point in the comics, Cudlitz “was actually concerned” about Abraham’s death taking anything away from it. He even told showrunner Scott M. Gimple, “This can not in any way take away from Glenn’s death. Glenn has a much more emotionally cemented place in this show.”

THE BUDDY SYSTEM | Cudlitz also reached out to his fellow casualty. “I knew that for Steven, this would be a very, very different experience than for me, leaving the show,” he said. “You’re talking about an actor who started on the show very young [and] grew up on the show basically. I knew this was going to be hard on him, so I told him, ‘You’re going to go through phases. You’re going to feel good some days, and then it’s going to creep back up on you and you’re going to feel like crap. You just need to just know that it’s all going to be OK.'” I just tried to make sure I was there for him. It was a bonding experience for the two of us.”

How are you doing in the aftermath of the traumatic Season 7 premiere? Hit the comments with your coping strategy.