A flame-throwing assassin targeted POTUS Lynda Carter on Monday’s Supergirl — but her attacks were mere flickers compared to the heat between Alex and her new “partner.”

Kara’s sister was initially reluctant to team up with newcomer Maggie Sawyer — a detective with a soft spot for extraterrestrials, particularly pretty ones who frequent alien-friendly dive bars — but by the end of the hour, she was ready and willing to throw down for her. In fact, I dare say Alex seemed disappointed when Maggie made an early exit from the infirmary to meet her “hot date.”

We know that someone in the Arrow-verse is going to discover their sexuality this season, and after Monday’s Supergirl, all signs are pointing to #Sawvers. Or maybe #Algie? Look, creating ‘ship names isn’t one of my superpowers, OK? That’s for you to do in the comments section.

MISS MARTIAN, IF YOU’RE NASTY | Inspired by President Marsdin’s message of unity (“The Statue of Liberty will stand for aliens, too!”), J’onn paid a visit to the aforementioned alien dive bar. And who did he find slinging drinks? Why, none other than the “last daughter of Mars,” M’gann M’orzz — aka Miss Martian! 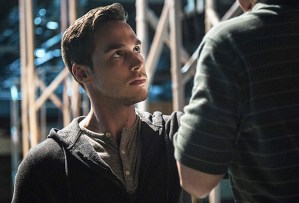 MON-EL HATH NO FURY | Though Kara and Mon-El’s relationship got off to a violent start — his first act upon waking was grabbing her by the throat and tossing her into a wall — they ended the episode with a handshake, which is as much as anyone could have hoped for considering the two are from warring planets. (Side note: I can already tell that Chris Wood is perfect in this role. I’m having glorious flashbacks to his time as Kai Parker, easily The Vampire Diaries‘ second-best villain ever.)

ROOKIE MISTAKE | I have a lot of thoughts about Kara’s first day as a reporter, all of which I’m going to express in the form of questions: Did she really think she’d get to interview the President of the United States for her first assignment? Shouldn’t she have been more excited about interviewing a huge name like Lena Luthor? What made her think she was supposed to interject her own opinion into a straight-new piece? And was Snapper Carr even that tough on her, considering no major paper would have ever run that story as it was?

Your take on this week’s Supergirl? Are we on the same page about Alex and Maggie? And who — or what — is President Marsdin, really? Drop a comment with your thoughts below.