This week on ABC’s Once Upon a Time, Emma was tricked into telling her loved ones the truth about her doomsday vision, while in flashbacks we learned of Aladdin’s own journey as a Savior.

IN AGRABAH, MANY YEARS AGO…. | Princess Jasmine enlisted street rat Aladdin to steal the “Diamond in the Rough,” a powerful weapon which can prevent the evil vizier Jafar from lording over the capitol. Once in the Cave of Wonders, Jasmine and Aladdin are almost crushed by a cave-in, until Aladdin uses a blast of magic to save them. As Jasmine suspected, Aladdin is a Savior — the “diamond in the rough” to ward off Jafar. But after Jasmine leaves, Aladdin gets a visit from Jafar, who uses a red bird — an oracle — to reveal the thief’s dire fate. Aladdin can avoid it, though, by using magical shears to “cut” away his Savior status.

Back at the palace, Jasmine alerts her addled, Jafar-controlled father that a Savior is on the way, but Jafar arrives to say that might not be the case, actually. When he then traps Jasmine inside a giant hourglass, to be buried in sand (a bit elaborate, dontchathink?), Aladdine swoops in via magic carpet to save the girl and the day. Afterward, Aladdin invites Jasmine to come with him to track down and vanquish Jafar, but she declines, needing to stay behind and get Agrabah back up on its feet. As Aladdin walks away, the shears magically appear in his Kenneth Cole messenger bag…. 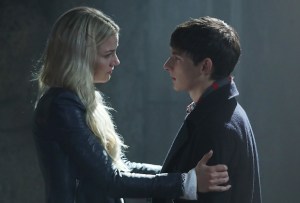 Emma led Archie into the woods on a search for the seer, only to find the young woman dead — and teacher’s aide Shirin fleeing the scene. Back at the cop shop, Shirin eventually reveals that she is in fact Princess Jasmine, and she has been looking for Aladdin — “the Savior.” The Purely Evil Queen, meanwhile, tries to find out from Archie what Emma has been sharing in their sessions. When he dutifully keeps mum, she magics him to the farmhouse to be watched by Zelena, while she masquerades as the shrink. As Archie, the Evil Queen goads Emma into spilling her secret to the Charmings, Henry and Hook — that she has foreseen her death, at the hands of someone hidden under a hood. Fearing she is the one to one day wear the hood, Regina dashes off to whip up a locator spell for Aladdin, because if he is alive, the “Saviors must die” prophecy is bunk.

While the Evil Queen treats Zelena to a spa day, where she convinces her sis to embrace her wicked side, for daughter Robin’s benefit, Regina shares with Emma a potion that will lead them to Aladdin, following “like magic” and all that. Emma leads them all to a crypt in the woods, where Jasmine finds the scarab she gave Aladdin next to a skeleton, and (hastily!) assumes the worst. Emma asks everyone to scram, so that she can be alone with the reinforced reality that Saviors must die. Henry though interrupts, to try to lay claim to his role in all of this — if he hadn’t knocked on her door years ago and forced the issue, etc. — but Emma says she would not have changed a thing, that she found real magic in her life, in him.

Aladdin then emerges from the crypt’s shadows, explaining that he in fact used the magical shears, and once Agrabah fell, he fled to the Enchanted Forest and (get this) has been living among them in Storybrooke all this time. With Emma’s nudging, Aladdin finds Jasmine and reveals himself to her. Later at the Charmings’, Emma says she will use the shears only as a last resort, if they can’t find another way out of her situation. She thus tasks Hook to hide the shears, leagues away in the ocean. But Hook lied about doing so — just moments after Emma promised him, “No more secrets” — and has the shears in his possession…. Why?

What did you think of “Street Rats”?

Want scoop on Once, or for any other show? Email insideline@tvline.com and your question may be answered via Matt’s Inside Line.