And just like that, the final season of The Vampire Diaries is upon us.

In a much-appreciated nod to the CW drama’s pilot, Friday’s premiere opened with Damon and Enzo engaging in a time-honored vampire tradition: tricking an unsuspecting pair of young lovers into thinking they hit you with their car, then feeding on them when they get out to check on you.

Only this time around, the vamps weren’t the ones doing the feeding; Damon and Enzo were merely picking up dinner for their former vault-dwelling master — kind of like a supernatural Seamless, if you will. (“I don’t particularly want to kill you,” Damon told a Matt Donovan look-alike, before dropping him into the creature’s vat of bloody water, “but sometimes we have to do things we don’t like.”)

But it wasn’t until the end of the gory, doom-laden hour that we finally learned what was on the receiving end of those deliveries: Ladies and gentlemen, Damon and Enzo are under the spell of a siren (presumably Sybil, played by UnREAL‘s Nathalie Kelley). Little is known about the motives of this bad-ass bloody lady, but thanks to the trail of clues Enzo left for Bonnie, Team TVD is already working hard to figure out what makes her tick — and how to free Damon and Enzo from her claw-like clutches. 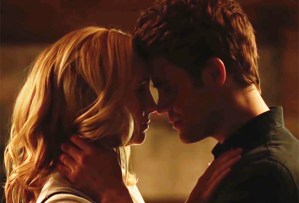 LOVE SHACK, BABY! | Despite the world basically collapsing around them — or perhaps because of it — Stefan and Caroline have decided to live together. (“I’m not trying to rush us,” she told him, but considering we only have 15 episodes left after this, I would encourage everyone to start rushing.) I can’t say I’m totally surprised that Stefan and Caroline decided to take this major step in their relationship, but I’m a little surprised that it was all Alaric’s idea; after Virginia broke into Chez Forbes and nearly killed the twins’ new nanny, Ric proposed that he move out of his crappy apartment to spend more time with the girls. (On behalf of the fandom, I thank him.)

SLICK RIC | Speaking of Alaric, Caroline may be concerned about her baby daddy falling for Seline’s “hot nanny charms,” but I think she should be more concerned about his new intern Georgie. While inspecting a secret passage in the Armory vault, she told him he had hot brains — I might be paraphrasing — and was really disappointed to learn that he’s “closed for business.”

‘DEAR ELENA…’ | Just as executive producer Julie Plec foretold, Friday’s premiere was jam-packed with Elena shout-outs. Not only did Stefan and Bonnie keep up their journaling for her, but Damon delivered a passionate monologue about his feelings for her — or lack thereof. “Elena doesn’t matter to me anymore,” he told Stefan after revealing that his humanity is permanently in the ‘off’ position. “I ripped the switch off the wall. There is no switch, Stefan, because there is no hope. … My path and Elena’s paths, they’re not the same. Her great beyond is a decidedly happier one than mine.” But fear not, “Delena” Nation: As revealed during a subsequent conversation with Enzo, Damon only flipped his switch so that Sybil wouldn’t know who he cares about, thus protecting his loved ones from her wrath. Phew\!

Your thoughts on TVD‘s final season premiere? Grade the episode below, then drop a comment with your full review.