Oh, Matt LeBlanc. We were Friends once, right? Millions of us watched you as the endearingly dim-witted Joey Tribbiani on that ’90s NBC hit. But now, more than a decade after Friends ended, you’re asking us to watch you in Man With a Plan, CBS’ dated, laughless new sitcom. In the words of Joey himself: “Why, God, why?”

Man With a Plan (premiering Monday, Oct. 24 at 8:30/7:30c) is depressingly formulaic from its first frames. LeBlanc plays contractor Adam Burns — though, really, we could just call him “Joey” to save time — whose wife Andi (Liza Snyder) is going back to work, putting him in charge of their three kids for the first time. And guess what, guys? He’s terrible at it! When the kids demand after-school snacks, Adam hands them a Listerine strip. His contractor job supposedly gives him a flexible schedule, but he acts like he’s never met his own children before. It’s all straight out of the CBS hapless-dad sitcom playbook.

But there’s a more insidious undercurrent to the show, and that is: Caring about your children is not manly. That point is driven home by the character of Lowell (Clipped‘s Matt Cook), a wussified stay-at-home dad who is in awe of Adam’s easy-going masculinity: “I’m very drawn to your alpha-male energy.” Basically, there are two types of dads in this world: wimps like Lowell who actually spend time with their kids, and real men like Adam who never speak to their kids. It’s a backward point of view that should’ve fallen out of favor forty years ago, but CBS is still playing it for (weak) laughs. 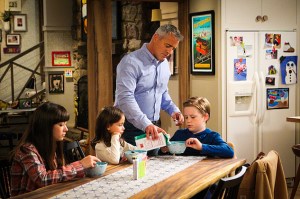 I will say this for the Man With a Plan pilot: It’s marginally improved from the original pilot, which was a total mess and had a woefully miscast Jenna Fischer as Adam’s wife. They wisely scratched that and found LeBlanc a more compatible TV wife in Liza Snyder, who’s familiar with the rhythms of CBS sitcoms from six seasons of Yes, Dear. LeBlanc and Snyder both know how to hit a three-camera punchline, but Adam and Andi’s relationship still has a distasteful strain of bitterness to it. (Note to TV producers: It is possible for a married couple to like each other and still be funny.)

And the whole enterprise just feels very phoned-in. LeBlanc appears mostly disinterested during his scenes, and the script doesn’t bother to give Adam any character traits beyond “a slightly less dumb version of Joey.” He doesn’t have any friends, and his kids’ personalities shift from “ungrateful brats” to “daddy-loving angels,” depending on what the current scene calls for. Even the studio audience can barely work up the energy to laugh.

Matt LeBlanc is a talented comedic actor. He deserves better, and so do we. In fact, he does have another, more successful post-Friends comedy: Showtime’s Episodes, where LeBlanc plays a tongue-in-cheek version of himself. In it, TV executives have taken a highbrow British comedy and turned it into a dumbed-down American sitcom called Pucks! for LeBlanc to star in — a sitcom, actually, that sounds a lot like Man With a Plan.

THE TVLINE BOTTOM LINE: Don’t waste your time on this one; Man With a Plan is depressingly formulaic and severely lacking in laughs.