For Wednesday’s third and (thank goodness) final presidential debate, it was Fox News anchor Chris Wallace’s turn to sit in the moderator’s chair. With Election Day less than three weeks away and plenty of hostility on both sides, tensions were running high between candidates Donald Trump and Hillary Clinton. (They didn’t even shake hands at the start of the debate.) But did Wallace manage to keep the peace?

After loudly complaining about the bias shown by the last two debates’ moderators — even while the debates were happening — Trump could hardly object to Wallace, who’s been an anchor on Republican-friendly Fox News since 2003. (Then again, Trump did get into a feud with Megyn Kelly last year, so all bets are off.) But Wallace, the son of longtime 60 Minutes anchor Mike Wallace, is also a well-traveled and respected journalist, logging 14 years at NBC and another 14 years at ABC during his four decades in the field. So it’s tough for the Clinton campaign to paint him as a right-wing ideologue.

There were hints of Wallace’s Fox News loyalties early on when he went right after Clinton on gun rights, quoting her as saying “the Supreme Court is wrong on the Second Amendment.” (She responded by insisting she supports the Second Amendment and clarifying her stance on gun control.) He later quoted Wikileaks (!) when questioning Clinton about her “open borders” stance on immigration, and she was quick to point out that those leaked documents were stolen by hackers, pivoting to challenge Trump on Russia and Vladimir Putin.

But to be fair, Wallace did also press Trump on Roe v. Wade and his recent contentions that the election is “rigged.” He brought up the recent accusations of sexual assault against Trump. And he fired back when Trump tried to talk over him: “Mr. Trump, I’m not a potted plant here. I do get to ask some questions.” So all in all, Wallace held both candidates’ feet to the fire, reading their own quotes back to them and forcing them to explain their positions at length. 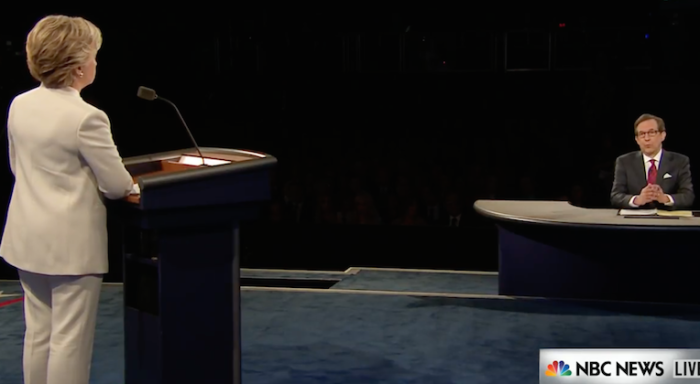 Yes, there was the usual back-and-forth between Trump and Clinton, yelling over each other at times. But in general, Wallace kept a tight leash on things, cutting both candidates off after short answers and turning to their opponent for direct rebuttals. It was probably the most orderly of the three debates so far, with Wallace at least trying to keep Trump and Clinton on schedule. As a result, we saw somewhat less bickering between the candidates and a stronger focus on the issues. (Which was nice… while it lasted.)

Wallace did say last month that “I don’t believe it is my job to be a truth squad,” so we shouldn’t be surprised that he didn’t fact-check either candidate much during the debate. But he allowed both candidates to lay out their platforms, and demonstrated a commanding knowledge of current events with his follow-up questions. It wasn’t perfect, but thanks to Wallace’s precise approach, this third debate might have been the most informative and substantial so far.

How do you think Chris Wallace did as debate moderator? Grade his performance in the poll below, then hit the comments to share your thoughts.