This week on The CW’s Arrow, Oliver had in his sights the distributor of a designer drug dubbed Stardust, though new recruit Rene aka Wild Dog got antsy and took on the baddie, Derek Sampson, himself — in a way that “royally pissed off” new D.A. Adrian Chase.

Sampson not only survived his scuffle with Wild Dog, he walked away from his dunk in a chemical cocktail impervious to pain, emboldening him to brush off his first clash with Green Arrow and then plot to take on rising gang lord Tobias Church, by creating a “superhuman” army. Oliver thus needed his own “army” and greenlit Rene, Evelyn et al to help him make another, successful run at Sampson, earning them full entry into the Arrowcave.

Elsewhere, a guilt-ridden Felicity confessed to Rory aka Ragman her role in his hometown Havenrock’s tragedy, while Thea made a bad sitch worse by asking reporter Susan Williams to “walk back” a story on Quentin’s new gig as deputy mayor.

Meanwhile in Chechnya, Diggle’s imprisonment on fraudulent charges was further complicated by the “return” of Floyd Lawton aka Deadshot (played by Michael Rowe, not Will Smith). The presumed-dead Suicide Squad member, however, was merely a vision born of Diggle’s guilt over Andy’s death. In fact, so despondent is Dig that he implored Lyla to stop helping him — prompting his Mrs. to recruit Oliver to bust him out of prison.

BACK FROM THE DEADSHOT | Arrow somewhat famously phased out its assorted Suicide Squad characters, as their Summer 2016 big-screen debut neared. So how were they able to “resurrect” Deadshot? “It’s always a case-by-case thing,” said Guggenheim. “In this case, it was really simple. I went to the writers’ room, this was a pitch on the table, I shot an email off to [DC Comics CCO] Geoff Johns, I got a response back, and Deadshot’s in the episode.”

THE CHASE IS ON | With the introduction of D.A. Adrian Chase comes the waiting game, for him to segue into his Vigilante persona. “[Episode 7] is where we show our cards the most in terms of Adrian’s character,” said Guggenheim. And in an atypical manner, “We’re writing [him] with the knowledge that the audience has a certain amount of comic book knowledge,” in which case “you’ll probably interpret certain scenes in a very specific way, and that’s fun for us. I don’t think we’ve ever really done it in this fashion before.” 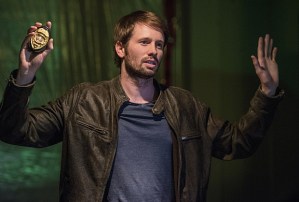 is still harboring two secrets, one from each of the men in her life — Oliver doesn’t know that she has a new beau, while Billy has no idea she works for Green Arrow. “No secret stays secret on Arrow forever,” Guggenheim reminded, revealing that Oliver will learn about Billy in Episode 5. (The EP kept mum, though, on when Detective Malone learns of his girlfriend’s “night job.”) Also to be filed under Secrets Never Keep: Diggle and Lyla discovering they had a daughter in the pre-Flashpoint timeline!

What did you think of the episode “A Matter of Trust”?