After weeks of speculation about the big game-changer that American Horror Story had planned for its sixth episode of Season 6, Ryan Murphy spilled the beans on Tuesday, and a day later, we did the twist, so to speak, leaving behind the format of My Roanoke Nightmare to join the series’ producer (Cheyenne Jackson) on the other side of the camera. But, this being AHS, that was only the beginning. Read on, and we’ll go over the other ways that “Chapter 6” flipped the script.

AND NOW FOR SOMETHING COMPLETELY DIFFERENT | As the hour got underway, Sid (Jackson) pitched to the network a follow-up hit to My Roanoke Nightmare. What was it, exactly? Return to Roanoke: Three Days in Hell. He intended to bring not only the Millers back to their former home — which he now owned — but the actors who’d played the couple and Lee. What’s more, “they’re gonna be living in that house over the blood moon,” he explained. Unfortunately, he soon learned that Shelby wanted no part of the sequel. (Which might just be the first sensible decision she’d made over the course of the entire show, eh?)

Still, 10 weeks before the blood moon, Mrs. Miller did sit down for an interview with Sid to set the record straight. (That was fast.) During their ill-advised get-together, we learned that she and Matt had split up, she’d had a fling with Dominic — the actor who’d played her husband — and she’d changed her mind about taking part in Return to Roanoke. If she was trapped in a house with Matt, she figured he’d have no choice but to talk to her. Her one condition: no Dominic. Later, Sid oversaw the rigging of the house with pop-up scares, did a dead-on Leslie Jordan impression, and discovered that someone had arranged fetal pigs at the site.

LIFE INTIMIDATES ART | Continuing to film BTS footage, Sid discussed with Agnes Mary Winstead, aka The Butcher, the incident in which she was charged with assault for going on a rampage in costume (complete with cleaver, obviously). “I dove too deep in the part,” she understated. But she was fine now and “excited to start the new season.” Alas, Sid had no intention of including her. Rather, he accused her of setting up the fetal-pig welcome mat and slapped her with a restraining order. Displeased (to put it mildly), Agnes began raving once again as if she was Tomasyn.

Meanwhile, Lee did in an interview with E! in which she revealed that she was also taking part in Return to Roanoke — in hopes of proving that she hadn’t murdered Mason. And no sooner had Sid found out that Monet, who’d played Lee, had developed a serious drinking problem since the original series struck gold than he was called to the set because a crew member had, erm, run afoul of his own chainsaw. Nonetheless, Sid didn’t want to shut down production, and accused his right-hand woman Diana of letting her imagination run away with her. In response, she smartly hit the road… which turned out to be a mistake. Mr. Piggy, hiding in her back seat, did her in. 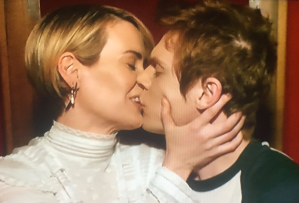 GAME NEWLYWEDS | At halftime, we met Audrey, the Englishwoman who’d brought Shelby to life in My Roanoke Nightmare — and learned that she’d married Rory, the actor who’d played Edward. “He is a whirlwind, that one,” she said of the “handsome young stud” she’d landed. (Hilariously, in his wedding vows, he promised to “love the s—” out of her.) The twosome had just arrived at the Roanoke house when he was called back to L.A. to screen-test for a Brad Pitt movie. Before he could leave, strange things began happening, which Audrey attributed to Agnes. “If she shows up again, we will get the police involved,” Sid promised.

As we headed into the last 15 minutes, we were informed that, over the course of the three days that Return to Roanoke was taped, every single participant in the production was killed… except for one. What we’d be watching from here on out was the never-aired series’ found footage. Toward the episode’s conclusion, Monet got her drink on, Mason’s charred remains stalked Lee, Audrey and Rory warmed up the hot tub, and Shelby pleaded with Matt to talk to her. When he did, she didn’t like his suggestion that they might not survive the production. Certainly, their marriage wasn’t going to — when Dominic arrived, Matt attacked him. Finally, Mr. Piggy surprised Audrey in the bathroom. When Rory investigated, he wound up being stabbed to death by Bridget and Miranda — thus giving them the R, Matt pointed out, to finish spelling “murder” on the wall!

What did you think of “Chapter 6”? The midseason switcheroo? The big reveals? Hit the comments!