The recent trend of TV musical events has been squeaky clean so far — The Sound of Music, Grease Live! — but now Fox is getting filthy with a remake of the 1975 cult classic The Rocky Horror Picture Show. It’s lewd, crude, and still shocking forty years later, and Fox’s new version (airing Thursday, 8/7c) is a vibrant adaptation that faithfully captures the spirit of the original. But… there’s also a fatal flaw here that threatens to spoil the whole party.

For the first twenty minutes or so, this new Rocky Horror (subtitled Let’s Do the Time Warp Again) is firing on all cylinders. The story, if you don’t know: Innocent young lovers Brad (Ryan McCartan) and Janet (Victoria Justice) enter a spooky castle on a dark and stormy night and are corrupted by the hedonistic, S&M revelry going on inside. The Gothed-out ghouls they meet include droll butler Riff Raff (Reeve Carney), cackling maid Magenta (Christina Milian) and flamboyant ringleader Dr. Frank-N-Furter (Laverne Cox), who’s created her own Frankenstein’s monster: Rocky Horror (Staz Nair), a bronzed god in golden underwear. 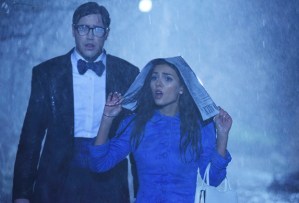 Die-hard fans will notice a few updates here and there. In a nod to the film’s famous midnight screenings, a rowdy audience of theatergoers occasionally chimes in on the action with shouts and props. (When Janet covers her head with a newspaper to avoid the rain, they do, too.) But mostly, the remake plays it straight, letting the original’s glam-rock soundtrack and weirdo characters work their strange magic. One definite highlight: the show-stopping number “Time Warp,” which gets an all-out, rock-star makeover with Riff Raff strumming a neon-blue electric guitar.

But then Laverne Cox makes her entrance as Frank-N-Furter… and the film’s momentum is stopped cold. This isn’t meant as a slam on Cox’s acting talents; she’s fantastic on Orange Is the New Black, especially this past season. But she’s glaringly miscast here. She doesn’t stand out from her misfit horde like Frank should. Her singing isn’t up to snuff with the rest of the cast. Her accent varies wildly from “Tim Curry impression” to “Southern belle” to something in between. And more generally, the idea of Dr. Frank-N-Furter loses some of its shock value when the role is made female, as it is here. (Is she even a “Sweet Transvestite” anymore?)

Perhaps it’s unfair to expect anyone to live up to the iconic original performance by Tim Curry, who thankfully appears here as the Narrator to give the remake his blessing. But Adam Lambert makes a cameo as rock-‘n’-roll biker Eddie… and I found myself wishing he had played Frank instead. (Lambert was actually offered the role, but passed.) The unfortunate truth is, Cox’s ill-conceived portrayal drags down what should be a fun, raunchy romp. And it’s all the more frustrating because the rest of this Rocky‘s cast is terrific. 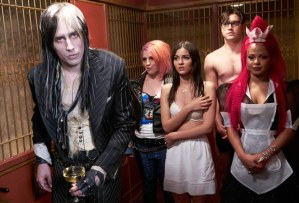 It’s a rock-solid ensemble, top to bottom, but I’ll mention a few standouts. As Riff Raff, Carney (Penny Dreadful) also has huge shoes to fill, but he steals every scene he’s in with deadpan jokes and a killer singing voice. McCartan (Disney’s Liv and Maddie) and Justice (Nickelodeon’s Victorious) both come from kids’ TV, but they confidently step into (very) adult roles here with admirable abandon. And Masters of Sex‘s Annaleigh Ashford has an infectious spark as blue-tongued groupie Columbia. They’re all so good that I wanted to spend more time with them — and less with Frank.

As I’ve said, this remake is devotedly faithful to the original film… maybe too faithful. The film’s plot goes off the rails quite a bit in the final act, devolving into out-of-left-field musical numbers and sci-fi gobbledygook. And the remake unfortunately follows suit, with the high energy of the first hour petering out near the end. I wouldn’t expect director Kenny Ortega and his crew to build a new third act from scratch, but the weak way it all wraps up is still a letdown.

As a Rocky Horror fan, I have to say I enjoyed much of Fox’s remake: The songs are still toe-tappingly catchy; the story is still delightfully subversive. (Like pizza, even a mediocre Rocky Horror is still pretty good.) But the Cox casting was an epic miscalculation that the production can’t fully recover from. Which is a shame, because this really could’ve been a home run — a new Halloween classic, even. As is, it’s simply a missed opportunity.