This week on The CW’s The Flash, Barry & Co. dealt with a vengeful metahuman as well as the arrival of a new (but familiar) speedster.

The new speedster news has Harry on edge, to the point that he repeatedly begs Team Flash members to talk his little girl out of wanting the hero life, while Wally is perturbed, to say the least, that his own brush with dark matter didn’t land him in the fast lane as well. Upon hearing how Jesse one day on Earth-two “jump-started” her powers, Wally goes so far as to put himself in harm’s way, only to have Jesse save him from becoming pavement pizza.

Meanwhile, a new meta is making mayhem — “Magenta” aka Frankie, the foster daughter of abusive John Kane. At Alchemy’s urging, Frankie’s power (to manipulate metal) surfaced, and she aimed to use it to snuff A) her foster dad and B) her mild-mannered personality. But when she went to drop a tanker (!) on the hospital inside which John (and Iris) had been entrapped, Barry heaped enough psychobabble at the troubled lass to avert disaster, while Jesse — with Harry’s blessing — sped to the scene to assist. 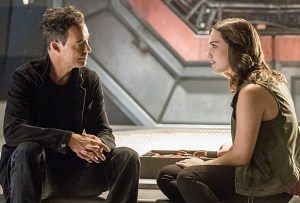 (and after talking-tos from “Dad Cop” Joe, Jesse and then Barry), Wally seemed to be “OK” with his non-speedster status, while Harry had a heart-to-heart with his daughter about embracing her fate — how she has always been his “hero,” but now she can be one “for everyone else” as well. Dubbing her “Jesse Quick,” Harry ultimately gifts her with her own speedster suite c/o Cisco and Caitlin.

* Julian continued to be a world-class todger to Barry, which you have to admit is refreshing.

* Harry was quick to deduce that Barry had been time traveling again, as evidenced by the altered timeline the Wellses arrived at. Cue several tsk-tsks and an overuse of the snarky “Not!” retort.

* The hour was bookended by dating attempts by Barry and Iris, who the first time around bored themselves with non-Flash talk. Things warmed up, though, once Barry decided that they need to accept who they are now versus before, and let Flash-iness filter into their love life. Though I hope Barry at least called Iris a cab after ditching her at wherever he had romantically whisked her off to!

* At episode’s end, Joe showed Barry and Julian video of Edward Clariss getting brutally and fatally lobbed around his Iron Heights cell by an unseen entity. Alchemy, invisible meta or ghost, they wonder…?

What did you think of “Magenta”?