Math has never been my Will Forte, but I’m pretty sure Tuesday’s Scream Halloween special had a higher body count than all of Season 2 — and the first one was a real doozy.

The two-hour event wasted no time appeasing its viewers’ thirst for blood, claiming a trio of casualties in its first 10 minutes, including everyone’s favorite sexy serial killer Kieran. (So much for those 10 consecutive life terms, eh?) 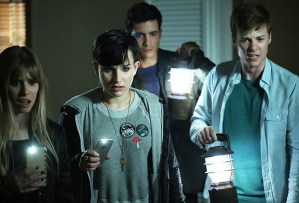 From there, the story shifted to the remaining members of the Lakewood Six, each of whom began the special at a crossroad of sorts: Emma was unsure about her collegiate future, though I’m a little surprised to hear she was interested in pre-med at all, given how much blood she’s accidentally swallowed over the years; Audrey was taking a stab (so to speak) at a “normal” relationship with a girl named Gina, who’s really into glass unicorns; and Brooke was contemplating a future in New York — with or without Stavo.

And what better way for a gang of mass-murder survivors to clear their heads than with a weekend getaway to the site of a Lizzie Borden-esque tragedy, courtesy of Noah’s curiously attractive book editor Jeremy? (Oh, Noah’s a best-selling author now, by the way. A lot can happen in eight months!)

Anyway, Shallow Grove Island was exactly what you’d expect it to be: stormy, grove-like and teeming with local hotties — the most notable of which being Alex, the poor man’s Kieran (let’s be real now), who wasted no time crawling down Emma’s throat. And killing everyone in his wake. 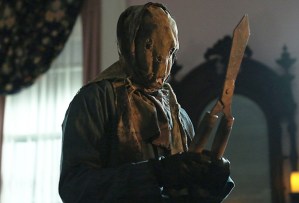 That’s right, folks: Alex (aka the one person who wasn’t accused of being the killer) turned out to be the killer, and no antique-store owner, mansion caretaker, island sheriff or book editor (RIP, #HotJeremy!) was safe from his *ahem* sheer madness.

Fortunately, Emma’s learned a thing or two about serial killers over the past two seasons — though she still struggles with the whole “don’t date them” thing — so following an impassioned speech (“I don’t need a hero! I’m Emma Duval!”), she knocked Tom off the balcony and made it to safety.

Of course, that nice safe feeling probably won’t last for long, given the new arrival in town: Brandon James!

* Lakewood University? Seriously, Emma?! Get. Out. Of. That. TOWN!

* Am I the only one who thinks the big Brandon James reveal would have been more powerful if it hadn’t been in the trailer?

* As for the future of the Scream franchise, all we know is that a six-episode third season is in the works. Whether or not that proves to be the end of the road for the show  is anyone’s guess.

OK, let’s hear your thoughts on the Scream Halloween special. Grade it below, then drop a comment with your full review.