The feud between Chief Boden and firefighter Jimmy Borrelli just cost one of Chicago Fire‘s finest his job.

Steven R. McQueen will no longer be a series regular on the NBC drama after Tuesday’s episode, in which his character Jimmy suffered a career-ending injury, TVLine has learned.

Unable to let go of his belief that Boden was responsible for his brother’s death, Jimmy lost faith in the chief’s leadership and took matters into his own hands during a fire call. In the process, the youngster was badly burned, putting an end to his blaze-battling days.

Below, executive producer Michael Brandt explains why Jimmy had to leave Firehouse 51 — and why even Dick Wolf would leave the show before Boden does.

TVLINE | What drove the decision to say goodbye to Jimmy?
We’ve wrestled with this over the last four years, in terms of threats and real dangers to people in the firehouse. There are times when people get injured, or really bad things happen to them, and we don’t follow through on that, and sometimes we feel like we have to pull the trigger on certain things. With Jimmy’s character, it just felt like he needed to stand up for what he believed in, but Boden needed to stand up for what he believed in, and those two things couldn’t live together. It was driven by the story and who the characters have evolved into.

TVLINE | What kind of discussions did you have with Steven about his character’s trajectory?
Speaking of trajectories, he’s certainly on his way up as an actor, on his way up as a leading man. I have no doubt that someday he will be the lead on his own show. The discussions with Steven were nothing but pleasant. He was a total professional about it. He understood, and I think he’s embracing the opportunity to go and be the No. 1 on his own show.

TVLINE | In deciding who would end up on top in the Jimmy vs. Boden battle, did you ever consider a scenario in which the firehouse loses its chief?
Quite honestly, no. Eamonn [Walker] has been with us since Day 1. He was the first character we cast. He’s Papa Bear in Chicago. I think [executive producers] Derek [Haas], Matt [Olmstead], myself or Dick [Wolf] would all be fired before Eamonn would be. [Laughs] He’s not going anywhere. He’s on the show as long as he wants to be. He’s too much of the rock. 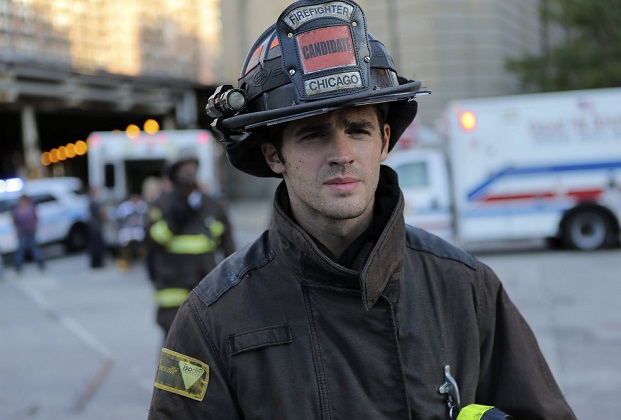 TVLINE | Will we see Jimmy down the road? Or has he burned those bridges too badly to ever salvage them?
Character-wise, you can never burn bridges on a show too badly to not salvage them. He goes out fighting for what he believes in, and there’s nothing wrong with that. At the end of the episode, there’s a scene between him and Boden where you realize everything is OK between them. Boden respects why Jimmy did what he did. But that said, there are no plans right now to bring Jimmy back to the show.

TVLINE | This isn’t the first character to exit on Fire. Is it important for you to have a change-up every couple seasons to keep things fresh?
M*A*S*H comes to mind in terms of great shows where they survived and actually flourished with changes [among] the lead actors and characters. I think that’s part of it. We’re going into our fifth year. Our leads, except for Shay [played by Lauren German], have all stayed, but there is an evolution to the show. It has to go on. So yeah, you do have to freshen things up with your characters from time to time. Every TV show does it, because you kind of have to. You can’t keep telling the same stories over and over. The hardest thing that we do as writers and producers on TV is make changes to the cast. It’s such a family situation in Chicago. But unfortunately, it’s a necessary evil.

TVLINE | There’s been quite a bit of shuffling in terms of who’s on truck and ambo, and now there’s a space open on truck. Will there be any more changes in regards to who’s assigned to what?
No, not as of right now. Truck was a little heavy with characters. We fudged a little the reality of how many people ride on truck, and how many people ride on squad, over the last four years. We have a lot of mouths to feed. We want to make sure that every character gets immediate storylines as often as possible. For now, Dawson’s permanently back on ambo, where I think we all feel like she belongs. She’s so great there — Monica [Raymund] as an actress, and also Dawson as a character. We feel really good about having Kidd on truck and going forward with who we have there.

Chicago Fire fans, will you miss Jimmy? Hit the comments with your thoughts on the character’s farewell.