Prepare to see a few new faces — and a lot more of some familiar ones — when Stranger Things returns for its second season. 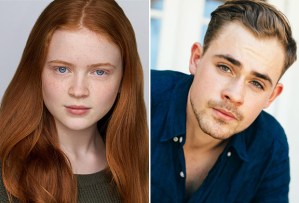 Sink will play Max, described as a “tough and confident girl whose appearance, behavior and pursuits seem more typical of boys than of girls in this era. She has a complicated history and is generally suspicious of those around her.”

Montgomery, meanwhile, will play Max’s “hyper-confident, edgy older step-brother. He steals girlfriends away from their boyfriends, is great at drinking games, and drives a black Camaro. But lurking under his apparent charisma, is a violent and unpredictable nature.”

Your thoughts on this latest casting update? General hopes for Stranger Things‘ second season? Drop ’em in a comment below.