The most memorable reunion during Supernatural‘s Season 12 premiere on Thursday night? Surprisingly, it’s between Mary and the impala, not Mama Winchester and her sons.

Sure, Dean’s interaction with his unexpectedly resurrected mother is both shocking (she knocks him to the ground) and tender (he recounts the story of how she met John). And just hearing him say the words “Come on, Mom” affected me way more than I expected. But when Mary sees the family car? It’s a moment.

“She’s still beautiful,” Mary says with reverence, tracing her fingers over the hood. “Hi, sweetheart. Remember me?” Then she gets that look on her face as she stares at the backseat. It takes Dean a minute to realize just what she’s remembering. 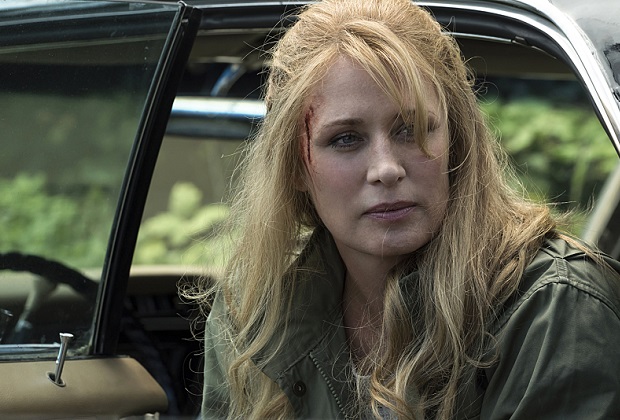 There isn’t much time for reminiscing beyond that. When Dean takes Mary “home” to the Men of Letters bunker, they find a trail of Sam’s blood. Not long after, Cas shows up, and Dean introduces his mom to the angel. “Come again?” she responds in shock. (Cas’ aggressive attitude as he threatens suspects upends all her angelic expectations.)

Despite that, the two have a nice bonding scene about the difficulties of adjusting to life on a strange Earth. (Cas still doesn’t trust computers.) They have something else in common, too: a strong determination to find Sam. Alas, that’s easier said than done after Lady Toni’s cohort sideswipes the impala – it’s OK, baby, you’re still beautiful – forcing Mary to come to the boys’ rescue and kill the woman.

She never wanted this hunter life for her boys, she confesses. Dean understands where she’s coming from, but that doesn’t change the fact that this is what he and Sam are meant to do. “I think we make the world a better place,” he replies. “I know that we do.”

Speaking of Sam… He is being tormented — again. This time is different, though, because Lady Toni’s idea of torture is giving him a cold shower. (The fandom says, “Thanks!”) When that doesn’t work because, come on, she decides to break Sam’s mind instead. He begins to see visions of his dead loved ones as their voices call out, blaming him. It’s a heavy thing to bear, so Sam slits his own throat — except it’s just a ploy to lure Toni inside. Unfortunately, he fails to escape, and she locks him back up by his lonesome.

So what is Toni’s endgame? She wants “to make America safe.” There have been no monster-related deaths in her home country since 1965 because the British Men of Letters are good at their job, she boasts. She suggests to Sam that they work together. Yeah, maybe unchain him from the chair first?

Then we have Crowley, who is chasing Lucifer, who is chasing his next vessel. Along the way, the former King of Hell kills two of the fallen angel’s minions for calling him Lucifer’s dog. Can you blame him? That was a bad time for Crowley.

Supernatural fans, what did you think of the season opener? Grade it via the poll below, then hit the comments to back up your pick!