How to Get Away With Murder served up the most sadistic killing in its three-season history this week, and the moment proved a little bit… heartwarming?

Indeed, we finally learned that Frank wasn’t merely hiding out in Coalport, Penn., but rather, had concocted an undercover identity as a prison janitor in order to smuggle a cannister of hydrogen sulfide into the infirmary; hook it up to the oxygen line of Bonnie’s decrepit, sexually abusive father; and melt the monster’s lungs from the inside out. “Enjoy Hell, Bob,” wasn’t just Frank’s parting message, it could also be the epithet on the dude’s tombstone.

That was far from the only shocker in the hour (which also found Laurel admitting she knew Frank’s whereabouts — in the exact town where Bonnie’s dad died — and Bonnie whispering back, “Don’t tell Annalise.” Insert shockface emoji here.)

Indeed, after Annalise had her law license suspended on account of her brutal slap of last week’s ladykiller client — turns out it was a cohort of her Middleton boss, Pres. Hargrove, who provided the incriminating DVD to the Pennsylvania Bar — our heroine agreed to enter alcohol treatment to save her practice, not to mention her tenure. Question is, does Annalise actually need to get sober? Nate certainly seemed to think so, after a nasty argument led a day-drunk Annalise to call him “a little bitch” and he responded by predicting she’d wind up dying alone in her house.

Did I mention Nate promptly hooked up with ADA Renee Atwood (aka Annalise’s Season 3 courtroom nemesis)? (The hell?!) And that Annalise tried to reignite the flame with nonjudgmental Eve — only to learn her college lover has finally moved on with a new woman and is moving to San Francisco to be with her? (Their tearful, bittersweet farewell was a great moment for both Viola Davis and Famke Janssen.)

Meanwhile, Connor and Oliver reached something of a detente in their breakup — with the latter guy opening up about his HIV-positive status making it harder for him to find new romantic prospects. “Maybe don’t rub it in my face,” Oliver asked, referencing Connor’s string of “Humper”-app hookups. “I’m willing to rub other things in your face any time you want, though,” replied Mr. Walsh, still clearly pining for reconcilliation.

And finally, in the flash-forward segments, we learned who was found — with a pulse! — down in the basement of Annalise’s burning building. It’s none other than Laurel — and according to the middle-of-her-ER-rotation Meggie (!), Wes’ law-school bestie isn’t just suffering from burns and smoke inhalation, she’s pregnant, too.

We caught up with Matt McGorry, whose Asher served as first chair during a complex case of the week, to talk about his character’s growth since Season 1, future with Bonnie and not-so-confident courtroom performance.

TVLINE | How much anxiety have you experienced this season, knowing a core character is going to wind up dead under a sheet at Annalise’s house — and not knowing if that corpse happens to be Asher?
I’m a pretty good compartmentalizer, so I’ve been pretty good at not focusing on it. And after three seasons on the show, I’ve realized one of the things that makes the writing intriguing is that it’s very hard to guess what’s going to happen. I’m not the kind of person who gets a lot of joy from trying to figure those things out. There is no actual way to parse it out, point to certain [plot lines] and treat them like you’re solving a crime.

It’s almost the same for me as trying to figure out who’s going to win the election. Beyond supporting the candidate I want to see elected, I let go of things that are beyond my control. And, considering we live in Shondaland — where anything can happen — I find it’s more useful to focus on enjoying when I am alive, enjoying the job and the moments, because ultimately there’s not much I can do about my fate anyway. And for me, it creates better work. In life, if we worried about dying all the time, it wouldn’t be a fun way to live. 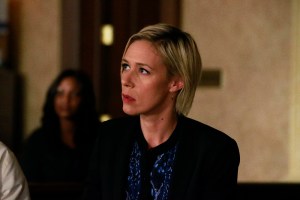 TVLINE | We saw a lot of interaction with Asher and Bonnie this week — two characters who have stayed pretty far from each other since they threw a corpse off a balcony in Season 2. Is this the start of a romantic reconnection or is this more about a new chapter in their relationship?
At this point, it really is more about the work. We get to see their relationship evolve in a new way, which really is pretty great. They both respect each other in a deep and fundamental way that relates to each other’s intelligence and compassion. It’s a different level of maturity for Asher, to see him reconvene now with Bonnie and have her notice that he is a different person in many ways than when they first started dating.

TVLINE | We’re so used to characters on How to Get Away With Murder kicking ass and taking names. It was a jolt to see Asher sweating through his suit jacket and relying on his notes in his first stab at being first-chair in this week’s case, dealing with a troubled teen accused of credit-card fraud who, it turns out, was only committing the crime in order to prepare for the imminent arrival of his math teacher’s baby.
I really loved that Asher’s way of dealing with being first chair was different than I expected. It’s easy watching TV or playing a character or existing in real life to assume that we know all the different aspects of a person. And here we’re seeing Asher have his first chance at doing what he’s prepared to do for three seasons. We all know Asher is this brash guy, he’s not shy, he’s outspoken, he’s maybe even flagrantly obnoxious sometimes. In my experience, people that present that way in real life often are the ones who are hiding the most insecurities. That’s not always apparent off the bat, but get those people in the right situations and it becomes clear. Sometimes that insecurity can even be something a person wouldn’t admit to himself. But Asher thankfully is young and emotionally pliable enough and interested enough in being a good person that he’s willing to examine these aspects of himself.

Often the men who are the most lewd are also the most insecure. They’ve propped up their entire identity on these performance of masculinity, what we think it means and the way it causes them to objectify women. We see that with [Donald] Trump. There’s this entire way we see him talk about assaulting women — and it’s all about power. Asher is nowhere near close to Trump, but these are all related ideas to how we view ourselves as confident and “comfortable” men’s men. I guess that’s tangential. [Laughs] But getting to see Asher in a more uncomfortable position was fantastic. He does have more to lose. He got started in this position and got interested in this field of law because his father was a judge. And now his dad is dead. So we get to see that manifest in a clear and interesting way.

TVLINE | Walk me through the scene where Asher calls out Bonnie’s own prior experience of being sexually assaulted by her dad to question whether or not she should call Tristan’s teacher to the stand and trick her into incriminating herself for raping him. And Bonnie zings back Asher’s own shameful past not reporting the gang rape of Tiffany.
This episode, the case of the week, Tristan is dealing with sexual assault of his own, and Bonnie is obviously dealing with those issues from a survivor’s perspective. Plus, Asher was close to that experience himself as an outsider who feels complicit. So it’s a very ambiguous line — one I considered myself — on the subject of whether it’s ever anyone else’s responsibility to out someone about sexual assault. In this case, it’s statuatory rape, and Tristan is a minor, which maybe makes it different. There are legal ramifications and a very narrow window in which you can put the teacher in a place where she can get the proper treatment. But you never want to be outing someone who’s been through sexual assault. So even me, Matt, watching that, reading it, being in it — Asher maybe didn’t bring it up to Bonnie in the right way, but it was an important conversation to have.

TVLINE | I loved that Asher was the person who implicitly said that Tristan’s experience was not hot, but was actually rape. I’m not sure that’s what we’d have expected from him in Season 1 or even Season 2.
Asher has been evolving. A lot of the ignorance people have — a lot of what ends up being hateful and perpetuating the norms of rape culture – comes from ignorance, from men’s insecurities and quests for power. It’s easy to dismiss those things as locker room talk, but ultimately, when people are faced with humanity and in any way open to understanding experiences that are not their own — as Asher is — they can really evolve and change. Getting to work on Tristan’s case firsthand influences Asher, and I’m glad to see changes in him we might not have predicted had we looked at him last season or the season before.

What did you think of this week’s HTGAWM? Were you surprised by Asher’s evolution? Sound off in the comments!