The Legends of Tomorrow actually have two new missions for Season 2 — one of them being to remind us, “Time travel is supposed to be fun!”

Coming off of a heavily serialized, sci-fi-heavy freshman run, The CW’s Arrow/Flash offshoot reboots things a bit when it returns Thursday, Oct. 13 at 8/7c, as evidenced from the very first scene, in which someone we’ve never met before barges into Mayor Oliver Queen’s office with a wild theory about Green Arrow’s time-traveling friends having gone “missing” — in the past. Over time, the series will touch more upon DC Comics’ venerable Justice Society of America, as well as introduce its take on the nefarious Legion of Doom.

TVLINE | You and Marc [Guggenheim] have been pretty honest about things in Season 1 that didn’t work. What’s an example of something that you decided, “We don’t need to do so much of that in Season 2?”
This show is fairly intensely serialized, if only because we explained what we were going to be doing so explicitly. Like, “Vandal Savage ruins the world on this that day! This is what we’re trying to stop! He’s immortal!” It doesn’t take a genius to realize that we’re going to fail 15 times and then succeed. It was such a linear quest, 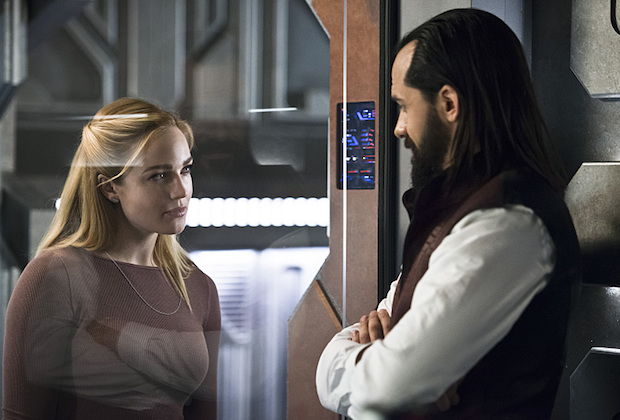 so we wanted to unfold Season 2 much more like a mystery in the macro sense, in terms of what our season-long mystery is. And even with individual episodes, now that we’re “time masters” and fixing these things that we’ve termed “aberrations”, it’s not always like you know the objective in the first frame of the episode. There are time criminals out there screwing with history, and we don’t always know what has been changed and what the consequences are. That gives our team a little more breathing room, now that they’re not burdened with having to save the world. If you have a smaller stakes mission, it allows our team to do what they do best, which is to disagree, screw around, have personal agendas….

We got very sci-fi towards the end of last season, and this season is much more about inhabiting those recognizable historical eras. Because when you say “time machine” to a person, they’re never like, “I want to go to the future.” The future is always horrible, the world is always coming to an end! You want to go to the past, to see those iconic moments and meet iconic people. Our show is about adventure and irreverence and humor… and we had some romance…. The Flash is earnest in the best possible sense, but our guys are slightly warped versions of heroes, so we want them to be sardonic and selfish at times. 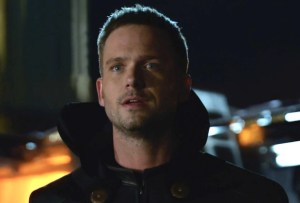 Season 1 ended, I assumed Hourman (Suits’ Patrick J. Adams) proceeded to tell the team what he needs them to do. And yet he is MIA from the premiere. Are we not continuous…?
We’re jumping forward by a bit, yeah. In our world, it’s basically as if time passes through the summer hiatus, for our characters just as is in real life. We missed [Hourman’s speech], but we will go back and get the second half of it. That said, as you can imagine, giving our Legends an admonition of what not to do is usually a pretty good prescription for getting them to do it. They don’t even listen to their own captain, so why should they listen to this guy? [Laughs]

TVLINE | It sounds like you’re giving a new character, Nate Heywood (new series regular Nick Zano), a lot of heavy lifting to do, at least in the first episode. Isn’t that a tricky call?
It’s not. Having Oliver Queen [with him] in the premiere certainly lends some gravitas to his entrance. I think what makes Nick fun is he’s the wide-eyed neophyte, he doesn’t know what superheroes are. So when he lands in the middle of our show, he’s able to call attention to, like, “Oh my god, this is a space ship!” “We just traveled through time!” And that infectious enthusiasm buoys the rest of our Legends. In a weird way, it reminds them — and the audience — 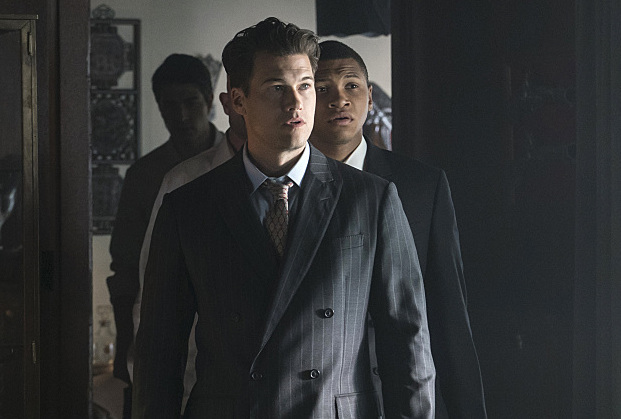 that time travel is supposed to be fun. “It’s not all doom and gloom and save the world. Let’s do the lighter version of this.”

TVLINE | But why Nate? Because he doesn’t have powers at this point, right?
He doesn’t, no. In a way, Season 1 was all about math and science and computers and the Oculus and the Vanishing Point. Season 2 is much more about history, the fact that the Time Masters have been destroyed and the Legends are now fixing these aberrations in history, so we needed a humanities major on our show. We’ve got Dr. Stein, we’ve got Ray Palmer, but we needed somebody who is able to understand world history, and that’s what he offers. He is basically Dr. [Indiana] Jones, a swashbuckling academic.

Nate would be the first to say that the blood has run thin in the Heywood family — it’s hard to grow up in the shadow of [his grandfather, JSA member Commander Steel]. He’s an historian and he thought he would remain one for the rest of his life, but when the Legends come into his life and introduce him to time travel, he realizes that he’s going to get to do more than read about it. I don’t want to spoil the surprise of how Nate comes into his powers, but he certainly is the last guy who ever thought he would be on a superhero show.

TVLINE | What do you want to reveal about which Legends are where and when as the season opens?
I will say that they are separated by many tens of millions of years, so you’ll get a wide spectrum. We’ll go from 20th century history to the Revolutionary Era, to the Middle Ages… In this season, we will visit a bit of everything. 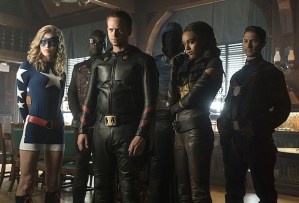 and more of the Justice Society of America show up in Episode 2. Was the JSA always on your radar with this show, or is it something you decided could give Season 2 the kick in the pants it needs?
We were looking for a zinger for the end of Season 1, and once we introduced Hourman we wanted to meet the greatest generation of superheroes, to have the yardstick for our team to measure against.

TVLINE | That’s a huge toy box to play with, almost a TV series unto itself.
It is, totally! It’s just cool, aesthetically, getting to find costumes of people from the ’40s…. I used to imagine what the attitude of the greatest generation of superheroes would be like.

TVLINE | Lance Henriksen has been cast as Obsidian. Does that mean he is the elder statesman of the group?
Well, when we meet Obsidian, he’s [played by Dan Payne (Strange Empire)]. Lance Henriksen plays a future version of him.

TVLINE | Turning to the Legion of Doom: Matt Letscher told me this won’t be a situation where Reverse-Flash, Captain Cold, 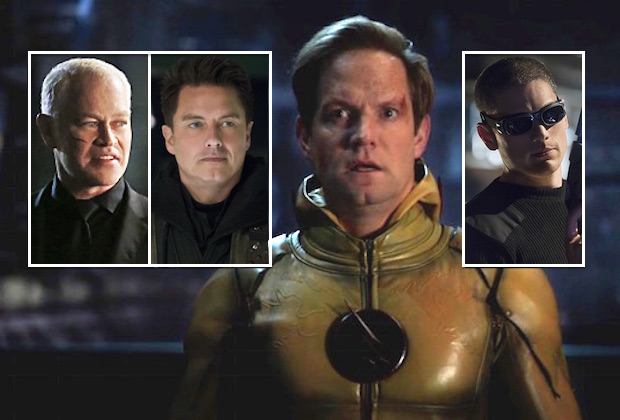 Malcolm Merlyn and Damien Darhk are driving around together in a “Doom Buggy.”
No, no….

TVLINE | Is there a leader amongst them?
Yeah, I think there are four. [Laughs] That’s the fun part. We had a singular bad guy in Season 1, Vandal Savage, and his agenda was clear. Going back to that notion of mystery, each of our four Legion of Doom members have their own somewhat competing agendas.

TVLINE | Might we get Black Manta?
Not yet! But the reason we brought the JSA in is because the Legion of Doom’s plan is directly related to the fate of the JSA in the ‘40s.

TVLINE | Will I at least get a helmet-in-a-swamp headquarters?
Uhhh, I don’t know…. [Laughs] I can’t tell you how hard it was just to find in Vancouver a brownstone to be our JSA headquarters. They were like, “What’s a brownstone?”

TVLINE | Which new character dynamics are you excited for people to see in Season 2?
I’m excited for people to see Rory and Amaya/Vixen (played by Maisie Richardson-Sellers), because to put a greatest generation JSA member against a 2016 criminal scumbag, there’s a delicious tension there. I’m also very excited to see Rory meet whatever incarnation of Leonard Snart (aka Captain Cold) we might choose. That’s a chance to watch our barely reformed arsonist threaten to backslide!