Chicago Fire‘s Season 5 premiere had all the trademarks of a horror movie: an unhinged ex who lurks in a dark alley, ominous mood music and a bloody conclusion.

There’s a definite air of crazy surrounding Stella’s former husband Grant during Tuesday night’s episode. Still, she tries to play off the potential threat as no big deal, even though she has proof that Grant was secretly in her apartment. She doesn’t know for sure when he was there, but we do: while she and Severide were in bed together. Shudder. 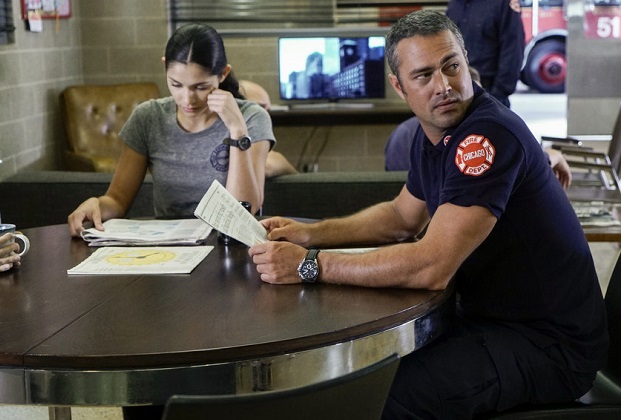 “He wouldn’t hurt a fly,” Stella insists. Maybe not, but he does try to hurt her, physically and verbally, behind Molly’s. Severide walks in on the scene and lunges at Grant, slashing the other man’s throat, possibly fatally. Let’s hope this doesn’t turn into a prolonged legal battle for Severide, although that would be a good way to tie in to Chicago Justice.

Meanwhile, Dawson is having doubts about being a foster mom and firefighter even though she has support now. She and Casey are really committed to each other, and he’s smitten with Louie, too. He even tells Susan Weller that he’s not interested in pursuing a political career because he wants to concentrate on being a firefighter — “among other things.”

But with the good comes the bad: Dawson is worried that Louie will once again be left an orphan if both of his parents are running into burning buildings. She asks Boden to be assigned to ambulance until the drama with Jimmy blows over, which might actually be never after his latest outburst. 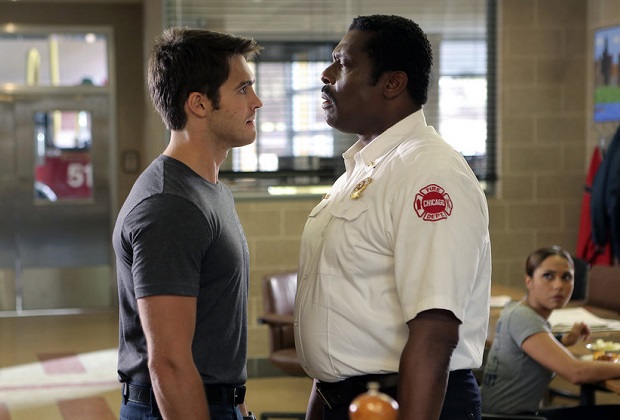 “You got my brother killed! I’m going to have your badge for that!” Jimmy exclaims in front of the entire firehouse after Boden denies his request to be back on truck. His insubordinate behavior gets Jimmy suspended — but not for long. The higher-ups inform Boden that the youngster is going to be reassigned to truck while a full investigation is launched into the brother’s death. Looking for some stability amidst all the chaos, the chief asks Dawson to stay on ambo, and she can barely contain her smile.

Other highlights from the season opener:

* Severide sweetly offers to move out so Casey, Dawson and Louie can have the apartment. Not as sweet? His “I’m not great at monogamy” response when Stella says he can stay with her until he finds a place. Cruz sums it up best with, “I’ve seen a lot of highway accidents less horrific than how you just handled that.”

* Antonio is awestruck while watching Brett save a life. She, too, is awestruck – by his muscles. “He’s in really good shape,” she observes to his sister. Gabby’s puzzled face as her brother and friend awkwardly flirt at Molly’s is the best.

* Brett figures out Mouch is behind some rather steamy firehouse-set fiction posted online. (The character names — Lawson, Jay, Manimal — gave him away.) Rather than outing him as the author, she suggests that his works need a female voice. As a lover of trashy romance novels, she proposes they write together and get published.

Fire fans, what did you think of the premiere? Grade it via the poll below, then hit the comments to back up your pick!