Who’s that girl? It’s Jess. And who’s that guy standing next to her? Your eyes do not deceive you: It is indeed Det. Jake Peralta of Brooklyn’s 99th precinct.

As a result of Fox’s crossover between Brooklyn Nine-Nine and New Girl, the protagonists of its veteran comedies met face-to-face Tuesday night — and if you thought Jake and Jess got into enough trouble on their own…

Our first glimpse of Ms. Day doesn’t come until late in B99‘s episode, “The Night Shift,” which finds Jake and the rest of the squad adjusting poorly to their new work hours. In an effort to solve an exciting case (like he used to do when the sun was up), Jake recruits Boyle to track down a jewelry robber in the area.

But it quickly becomes clear that things have changed during those six months Jake and Holt spent in Witness Protection. Sure, Boyle is game to solve a case… but he needs to be back home by sunrise so he can spend time with his son. Much to Jake’s chagrin, gone are the days when he and Boyle put sleep on the back burner until their perp was locked up.

Jake is still determined to solve the crime himself, and when his suspect flees on foot, he decides to commandeer a car — a car driven by none other than Jess Day. (“It’s a crossover!” Jess blurts out in a sly meta moment, before clarifying that the vehicle she’s driving is a crossover SUV. I see you, B99 writers.)

Naturally, it’s mere minutes before Jess and Jake end up in a car wreck, having careened right into a garbage truck in their pursuit of the criminal. But Jake ultimately decides he doesn’t want to finish the investigation; thanks to some oddly insightful advice from Det. Lohank (Veep‘s Matt Walsh), Jake realizes he doesn’t want everything to go back to the way it was. If that were the case, Boyle’s adorable son wouldn’t be around — and Jake offers an in-person apology to both Boyle and Nikolaj, complete with a toy garbage truck for the little guy. 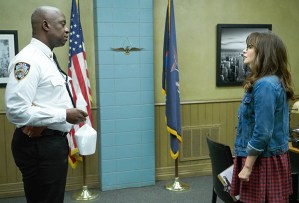 In the New Girl half-hour that follows, we learn that Jess and the gang are in NYC for a swanky event at Schmidt’s high school. He’s being honored as a distinguished alumnus, and the entire group — as well as Schmidt’s overbearing mother, played once again by Nora Dunn — is there to support him.

There’s just one tiiiiiny little catch: Schmidt isn’t the only alumnus being recognized. In fact, hundreds of past graduates are going to be honored at this event, which is really just a fundraiser for a new scoreboard in the gymnasium.

Hoping to cheer up a devastated Schmidt, Jess braves his favorite New York deli to pick up the soup he’s loved since childhood. But once she buys her friend some comfort food and gets back in the car — Schmidt’s mom’s car, I should note — Jess is shocked to find Jake Peralta knocking on the window, asking if he can commandeer the SUV. Garbage truck, car crash, yadda yadda yadda.

Upon getting Mrs. Schmidt’s car totaled, Jess hoofs it to the 9-9, where, to no one’s surprise, Gina sticks a pile of liability paperwork in her face and is otherwise not helpful at all. Capt. Holt, on the other hand? He inadvertently gives Jess the perfect pep talk, explaining that all things happen for a reason, “and that reason is random chance.”

But Jess spins Holt’s words a different way, choosing instead to reflect on her last visit to New York, a trip that was so disastrous she decided to come home early, leading her to find her boyfriend Spencer cheating on her. It must have been fate, Jess says — and, realizing that there’s not much time until Schmidt’s event begins, gives him a call and urges him not to roast his former classmates, as she had previously suggested. After all, without their taunts and teases throughout high school, Schmidt wouldn’t be the man he is today.

Schmidt doesn’t listen. He does roast his onetime peers, and it goes extremely poorly. But when the alumni begin mocking Schmidt as they used to do during student council meetings, Cece comes to his rescue, taking the mic and promising to give the crowd a beat-down if they don’t stop razzing her husband. (Bonus: This act of hostility finally earns Cece the respect she deserves from Schmidt’s mother.) 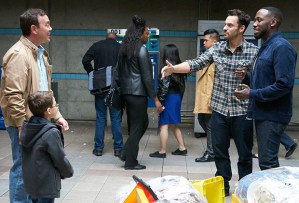 Other items of note from Tuesday’s episodes:

* Despite telling Amy that she’s running to the bathroom for “stomach problems,” Rosa uses most of her night shift to step away from her desk and wait on a park bench, where she is scheduled to meet her fiancé, Adrian. But Rosa’s man never shows up, and the typically-tough cop allows herself to shed a few tears in front of Amy at the thought of Adrian ditching their relationship.

* After blowing all their money on a lavish New York lunch, Winston and Nick are forced to busk in a subway station in order to scrounge up enough change for a MetroCard. They put on the most disappointing street performance in history, which essentially consists of stacking random subway items in a pile, then failing to jump over the heap. But when Boyle and his son stop to watch the show, Nikolaj empties his dad’s wallet into Winston and Nick’s paper cup, giving them enough moolah to (1) make it to Brooklyn and (2) spring for a fancy post-fundraiser limousine.

* The New Girl gang has an awkward run-in with Coach, who acts offended that his former loftmates weren’t going to visit him in Manhattan. But then he cheekily admits, “I’ve been to L.A., like, five times,” and brings it in for a group hug.

With that, I hand it over to you. What did you think of the Brooklyn Nine-Nine/New Girl crossover? Grade it in our poll below, then hit the comments with your full review.