American Housewife was originally called The Second-Fattest Housewife in Westport. It’s a title that perfectly represents Tuesday’s series premiere, assuming you can get past the fact that its central character isn’t actually fat.

Of course, that’s part of the alleged joke in this mean-spirited sitcom that, having changed its title, is hopefully planning to throw out its premise and start fresh in Week 2.

The series centers on Katie Otto (Mike & Molly‘s Katy Mixon), a mother of three with serious body-image issues. When she learns her overweight neighbor Pam is leaving town, she makes it her mission to find a “ripe fatty” to buy the house next door. If she doesn’t succeed, she risks becoming the second-fattest woman in her picturesque Connecticut suburb — a place where all of the other moms live on a steady diet of green juice. 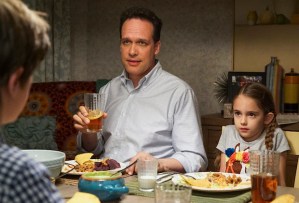 Katie eventually finds a heavyset woman willing to make an offer — a woman Katie’s husband Greg (The Drew Carey Show‘s Diedrich Bader) says is so fat that “there’s no getting around her on the sidewalk” —  but chases her away once she learns she’s both a bigot and a homophobe. As a result, the seemingly perfect Viv (GCB survivor Leslie Bibb) buys the house next door. She introduces herself to Katie as a former fat person who intends to whip her into shape, which is meant to be a nice gesture, but just makes her intolerable.

Speaking of insufferable human beings, did I mention Katie has three kids? Anna-Kat (Transparent‘s Julia Butters), the youngest daughter with extreme anxiety, is introduced whilst urinating in the backyard. Middle child Oliver (Supergirl‘s young Kal-El, Daniel DiMaggio) is a garbage person who doesn’t “get” charity and takes money from homeless people. And oldest daughter Taylor (Johnny Sequoyah in the pilot, but Meg Donnelly in subsequent episodes) doesn’t have a personality, and is bound for therapy since her mother seems to despise the woman she’s becoming.

The closing montage, which only works because it promises a future for the show free of fat jokes, finds Katie breaking the fourth wall to declare she doesn’t intend to change anything about herself. If subsequent episodes hold her to that, perhaps there’s a future for American Housewife beyond a pilot that probably should’ve been scrapped.

What did you think of American Housewife? Grade Episode 1 via the poll below, then hit the comments to share your thoughts.