This week’s Big Bang Theory finds Sheldon in Penny’s bed, but not for the reason some overly creative ‘Shenny’ fanfic writers have dreamt up over the last decade.

After years of dating, Sheldon and Amy relocate to Apartment 4B to see what it would be like to live together. Meanwhile, someone learns the gender of Howard and Bernadette’s baby, but it’s neither the mom- nor dad-to-be. Let’s recap:

THE ROOMMATE RECONFIGURATION EXPLORATION | When Amy’s apartment gets flooded, leaving her temporarily homeless for five weeks, Penny offers up Leonard’s room. Sheldon is naturally resistant to the idea of shacking up with his girlfriend, until it’s pitched to him as a quasi science experiment. He signs on, but insists on a tweak: they need to carry out their research at a neutral location so his findings aren’t influenced by his comfort being at home. That’s when Penny proposes that they conduct their little beta test at her place.

Once Sheldon is officially moved out, Leonard and Penny celebrate with a pantsless dance party, which is ultimately cut short when Leonard has an asthma attack while doing “The Worm.” Across the hall, Sheldon keeps Amy up throughout the night tossing, turning and talking in his sleep. When she eventually tries to spoon her dozing beau, he unwittingly knocks her off of Penny’s memory foam mattress.

The next morning, Amy and Sheldon argue in Apartment 4A about whether their experiment can already be considered a failure after 12 hours. The intensity of their dispute gets both of them hot, prompting them to save any decisions for later so they can scurry back to 4B and makeout. 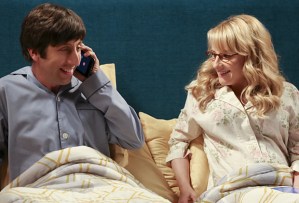 THE GENDER ACKNOWLEDGMENT HESITATION | After Raj accompanies Howard and Bernadette to the OB/GYN, he reveals he “accidentally” peeked at their file and learned whether they’re having a boy or a girl. Though they initially don’t want to Raj to tell them, knowing that he knows drives them berserk. (Even worse, he’s probably already told everyone in his Grey’s Anatomy fan club!) Their curiosity almost gets the best of them, calling Raj multiple times in the wee hours of the night before quickly hanging up.

Will “Shamy” survive an entire five weeks at Penny’s? Will Howard and Bernadette eventually cave and make Raj spill about the gender of the baby? Weigh in below.