Um, excuse me? Has anyone seen an updated copy of the Empire Entertainment HR Manual?

I mean, far be it from me to encourage another frivolous lawsuit in this economy, but with executive assistants “multitasking” under Lucious’ desk, random delivery guys showing what Brown can do for Anika, and Shyne using artistic differences as an excuse to choke out Nessa in the studio, it’s only a matter of time before a lesser power in the Lyon family melodrama lawyers up, channels Rihanna and declares, “Pay me what you owe me!”

Don’t act like you forgot, Empire fans. I know, I know, you spent the last 57 minutes curled up in a fetal position on the living room couch after Lucious had/received that “stroke” in the middle of a conversation with Anika. But that was hardly the climax (sorry) of Season 3, Episode 3, “What Remains Is Bestial.” 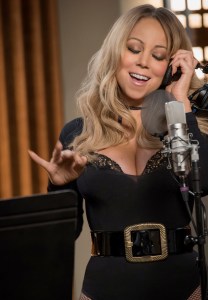 Some genuine stakes in the ongoing Cookie-Lucious showdown? Check. Andre facing an unexpected threat to his very freedom? Uh-huh. Mariah Carey’s cleavage playing the part of a CW superhero? Girl, you know it’s true. Leah allowed to roam the Lyon estate with a functional paring knife? Oh, honey, you better keep your knees to your chest as we recap the action.

NO I DON’T LIKE IT THAT THIS DUO PUT A RING ON IT | Lucious is so obsessed with streaming numbers that he’s apparently bought the lab set from CSI: Miami and is following subscriptions to Empire Extreme on a see-through screen in his office. He needs to hit 10 million by Thursday or face the shutdown of his Tidal-esque business. Anika pops in to ask for the gig as Empire’s new head of A&R — side note: Where Becky? — when suddenly Lucious appears to be in stress, possibly suffering from an aneurysm. “Do you need me to call a doctor?” Anika asks, doing her best to feign concern. But nah. From under Lucious’ desk comes Anika’s old assistant — and this is the exact moment that 15 million Americans taste bile rising in the backs of their throats. “Keep putting that back into that work of yours,” smiles Lucious, as his sexual conquest leaves the room. Soooooo nasty, dude. Not that it doesn’t make for great drama.

The Andre-Anika drama’s not done yet, though. Leah is following Boo-Boo Kitty around the mansion judging her mothering skills, and that leads to the following delicious exchange. 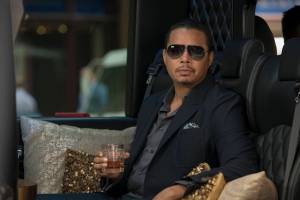 Later, Anika takes up residence in Lucious’ home office and finds herself all excited about Empire Extreme passing that 10 million hurdle. “YES! YES! YES!” (I’ll have what she’s having. #WhenHarryMetSally) But when the ultra-fine USP (not a typo) delivery guy pops his head up like a perfectly timed Whack-a-Mole, Lucious is enraged.Anika, however, reminds her “spouse” that she’s saved his butt twice (by marrying him and finding the teddycam) and she’s willing to play the game — but only to avoid “mutually assured destruction.” Ahhhh, yes, there’s the wig-rocking, punch-throwing crazylady who’s indispensible to the Empire narrative! #RIPRhonda 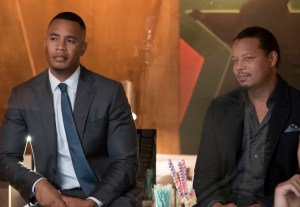 ANDRE’S LIFE MATTERS | Following last week’s harrowing arrest — for the simple act of trying to move his possessions out of the home he shared with his late wife — Andre finds himself as the reluctant posterboy for the #BlackLivesMatter movement. No matter that he’s a Wharton grad and a Fortune 500 CFO, he still has to deal with media questions like, “Are you a gangster now, too?” To his shock, Andre gets to court and finds out he’s facing a felony battery charge — one that his old attorney pal advises him to cop a plea to. Lucious picks up Andre, Jamal and Hakeem from the courthouse and tries to shame them — “Y’all don’t know you’re black,” he hisses, kicking himself for letting his sons breathe “rarified air” — but Andre is having none of his dad’s unrighteous indignation. “I’d rather be in hell — I’d rather be dead,” he screams, than end up like Lucious. Still, will he have to turn to his dad now that Tariq is stalking him and promising him immunity — if he flips on his dad? #BadUncle 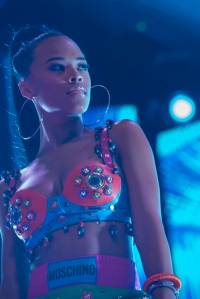 MONSTER MASHUP | Hakeem is in full tantrum mode after Tiana’s new boyfriend Graham makes a guest appearance at Leviticus and spits a verse that relentlessly mocks the youngest Lyon son. (And yet no one mentions Tiana is wearing a baffling DIY catastrophe involving boxing trunks, discarded beads and Pepto Bismol?!) Lucious suggests his son fight back with a dis track, and it’s all going well ’til ‘Keem’s new crush/artistic partner in crime Nessa expresses her reservations about providing the hook. “I get it: You’re mad at your ex,” she says. “But disrespecting her is not my jam.” Within seconds, Shyne has her by the throat, sending the terrifying message that her artisitic journey is not her own — and that he cares so little about her instrument that he’ll manhandle it without so much as a second thought. Meanwhile, Lucious plays to his son’s basest natures, wondering “What in the hell happened to that monster who tried to take his father out and rule his throne? Where he at?” He goes on to say that’s the kind of man he wants raising his actual granddaughter/publicly recognized daughter Bella. Ummmm… I can’t even comment on how jacked up this is. Is it a small sign of growth that Hakeem doesn’t have Nessa sing the hook, but rather flips and weaponizes the vocals from Tiana’s new single to communicate his message? Please discuss. (Also on the docket: Has Tiana’s story been completely exhausted at this point?) 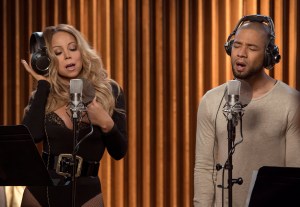 HELLO, KITTY! | Jamal flees his PTSD support group — but not before a maybe/possibly meaningful exchange with the tall drink of water/veteran who serves as its moderator. Cookie hooks her son up with pop diva Kitty (Mariah Carey, playing herself, right down to the bathing-suit costumery and up-n-out décolletage) to record a duet, stream it on Empire Extreme and stop Lucious from releasing his middle son’s Black and White album. The end result is vocally pretty amazing — and ends with Kitty/Mariah’s “dog whistle over intrictate piano” fabulousness. “My boy is high as a kite, but damn that sounds good,” giggles the consistently heinous Lucious, who confirms Jamal’s suspicion that he’s an actual vampire. And then what does Daddy go and do? He cuts all of the Cookie-produced tracks from Jamal’s long-dormant project — and releases it as The Black Album. 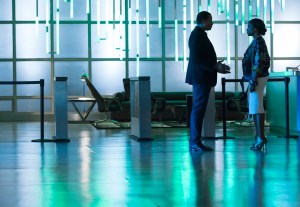 COOKIE CRUMBLES | Did I mention Lucious didn’t need a new Jamal record to hit that 10 million milestone? That’s the kind of creepy he’s bringing up in here. But while Cookie tries to keep the situation light — “Do you ever not mention Empire Extreme?” — by the end of the episode, she realizes her latest struggle with her ex has become deeply personal. That’s because she stops one of her new love interest Angelo’s proteges at the “Woke” project from shunting his MIT scholarship and signing a rap deal with Empire — even repeating Angelo’s remark that “the world has enough rappers.” Lucious strikes back, reneging on their deal to let Cookie run Empire’s music biz. The board of directors is on her side, though, Cookie reminds him — and her Alexis Carrington-on-steroids wardrobe carries its own undercurrent of hypnosis, too, K? “You wanna play? Let’s play,” Cookie seethes, and suddenly, the prior two weeks of “Lucious, we’re done” threats seem to be displayed in all caps, in neon lights, against a darkening sky.

What did you think of this week’s Empire? Hit the comments with your thoughts!