Oliver Queen is burning the candle at both ends, as The CW’s Arrow let fly with Season 5 on Wednesday night.

In his role as “Mayor Handsome,” Ollie has been “sleepwalking” (as Thea puts it), late for meetings and appearances. And when he does show up, his thoughts aren’t always politically correct (such as when he lambasts the SCPD’s rampant corruption… in front of the SCPD). As Oliver explains to his sis, the office of mayor allows him access to actionable intel to employ in his other job. And if he’s slacking as a politico, it’s in part because Green Arrow has been going it alone even since Dig and Thea hit the bricks, in the wake of Laurel’s murder.

Felicity has been riding Oliver hard to bring in some new recruits — namely, “Wild Dog,” Evelyn Sharp (fka Wannabe Canary) and “Mr. Ski Goggles” (she’s still workshopping the name). But Oliver says nyet to the idea, holding onto the hope that he can get the old band back together. When Oliver gets word that Quentin Lance has slipped back into town, he finds the formerly top cop off the wagon, Donna-less (a fate we wish on no man) and morose. (“A drunk needs a reason to stay sober,” Lance notes, “and I’m fresh out, my friend.”)

While Oliver juggles his two worlds, a new criminal emerges — Tobias Church, a street tough who has left Hub City and Blüdhaven in his ruthless wake. He quickly lays down the law with SCPD’s dirty cops, before launching his plan to make his mark and “take down the biggest guy in the yard,” meaning Green Arrow. And to that end, his men crash the Black Canary statue dedication to take hostages, Mayor Queen included.

How Oliver extricates himself from that situation ties into the first of this season’s flashbacks, where Oliver has gone to Russia to make good on his promise to Taiana, to kill Constantine Kovar. Running afoul of a local gangster along the way, Oliver’s bacon is saved by Anatoly Knyazev, by way of a first painful lesson on how to dislocate one’s thumbs to free tied-up hands. Anatoly questions Oliver’s extremely circuitous path back home, sensing that he is avoiding his future by perpetuating the past. Anatoly cites a Russian saying, that “a shark that doesn’t swim drowns.” Meaning, Oliver needs to move forward (or “Always forward,” as Luke Cage might say) at some point — by the end of Season 5’s flashbacks, ideally! Anatoly warns Oliver that his mission against Kovar is a suicidal one, but the Bratva brotherhood can help him — if Oliver survives the punchy, kicky, stabby initiation. 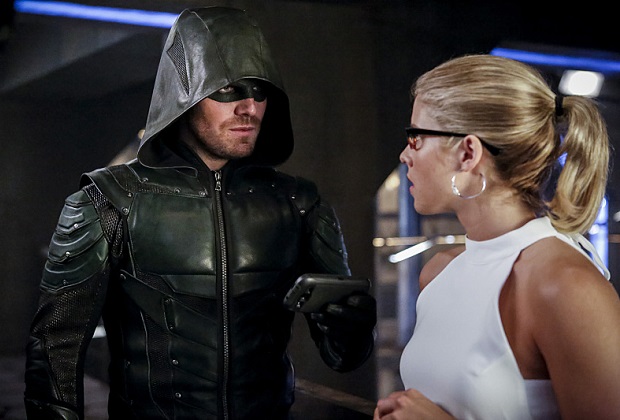 Back in present-day Star City, Oliver uses Anatoly’s trick to escape his zip ties and — gulp — snap the neck of Church’s guard, in the name of protecting his secret. Thea, having begrudgingly suited up as Speedy, arrives on the scene to assist with his exfil, but they can’t grab the hostages yet due to explosive trip wires surrounding them, so they bolt. Back at the lair, Thea rips her brother for putting killing “back on the table.” Oliver counters that Malcolm was right all along, that Green Arrow must do what’s necessary or not be out there at all. (After all, had Oliver killed Damien Darhk when he had the chance, Laurel would still be alive.) Speaking of Laurel, Felicity reminds Oliver of the promise her made on her deathbed, and in flashback we see that she beseeched him, “Please don’t let me be the last Canary. That way, a part of me will always be out there with you.” Out by the Canary statue, Oliver unsuccessfully tries to reach Dig in Chechnya, before Lance arrives to offer a handful of cops Green Arrow can trust “to help in whatever way we can.”

Oliver coordinates with said cops to infiltrate where Church has the hostages, and the mission is largely successful — though Church gets away. Oliver is determined to stop the new baddie, so he leaps out a window and shoots a rappelling arrow into the getaway chopper. Climbing inside the bird, Green Arrow and Church slug it out, until the archer gets pushed out the open door. Luckily, Oliver has a nifty “parachute arrow” (!) to ease his landing. 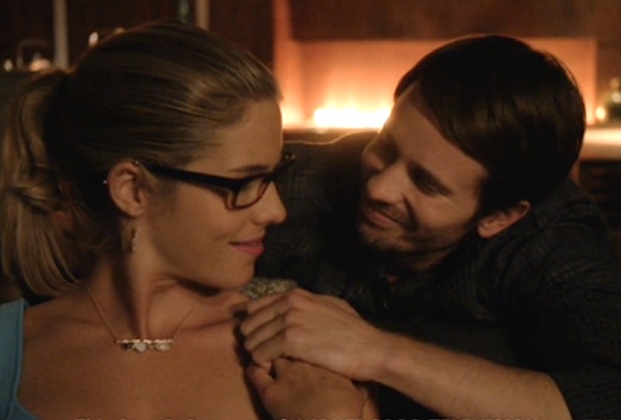 Back at the lair, Oliver becomes amenable to the idea of adding new vigilantes — as well as Curtis, who took a beating while tracking Wild Dog — to the team. After, he finally connects via Skype with Dig, who agrees it’s a “good idea” to rebuild the team. When Dig asks if Oliver has any notion of “back to normal” with Felicity, the hero shrugs… while we see his ex-fiancee return to the loft at the end of a long day, to receive a welcome shoulder massage from new boyfriend Detective Billy Malone.

Then, in a final tag, we meet the other new adversary on tap for Season 5: the dark archer to be dubbed Prometheus, who takes out one of Lance’s “good” cops.