Monday night’s premiere of Timeless, the time-hopping NBC drama from creators Eric Kripke (Supernatural) and Shawn Ryan (The Shield), was grand and clearly expensive. (How about that Hindenburg?) But was it enough to make you want to revisit the past again?

Before you chime in with your thoughts, a recap of the pilot: After ex-NSA asset Garcia Flynn (ER‘s Goran Višnjić) steals a time machine, Homeland Security recruits history professor Lucy (Suits‘ Abigail Spencer), scientist Rufus (Better Off Ted‘s Malcolm Barrett) and Delta Force soldier Wyatt (Star-Crossed‘s Matt Lanter) to stop him — in the past. How are they supposed to do that? By donning historical get-ups and using a not-as-shiny prototype machine to travel to when Flynn is: the day of the Hindenburg disaster. 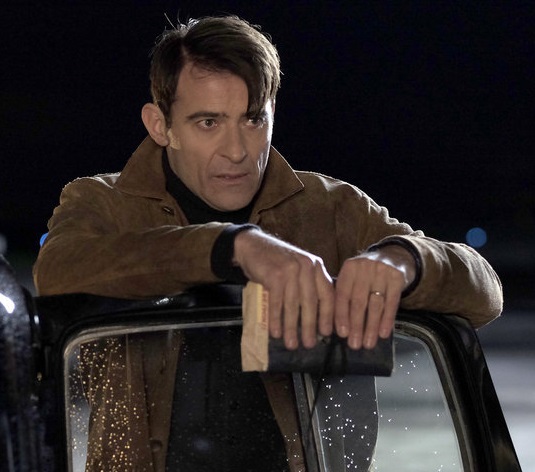 In 1937, the trio heads to a bar, where they meet Kate, a famous reporter covering the Hindenburg’s arrival who is fated to die during the airship explosion. She immediately captivates Wyatt, who wants to save her life because she reminds him of his late wife. But changing the past is a big no-no — not that they need to rescue her. Flynn does it for them when he stops the disaster from happening.

Lucy, Wyatt and Rufus are confused about Flynn’s seemingly heroic actions until Lucy realizes that destroying the Hindenburg during its departure flight, and thereby killing several important historical figures who are onboard, would be much more damaging to America’s foundation. Flynn is trying to kill America in the crib, Lucy theorizes.

Unfortunately, in the midst of all the action, the team gets arrested. Good thing they have a clever plan to escape from jail: Rufus distracts the racist officer with a tirade about all of history’s great black men named Michael, while Wyatt uses the underwire from Lucy’s bra to break them out of the cell.

On the Hindenburg, Lucy and Rufus pose as Anarchist Black Cross members and demand the ship be grounded. Meanwhile, Wyatt tries to defuse the bomb. They’re able to save the day with only a few casualties, the most heartbreaking one being Kate, who is struck by a bullet during a standoff between Wyatt and Flynn.

Then, in a series of pilot-ending twists meant to reel you in for Episode 2:

* Flynn shows Lucy a journal featuring her handwriting, but she didn’t write it — yet. He tells her she’s important in ways she can’t even imagine, and that she should ask about Rittenhouse and why they really chose her for this mission. Homeland Security claims not to know anything about the former.

* It’s revealed that Rufus was secretly recording Lucy and Wyatt during the trip for his boss.

* Lucy, Rufus and Wyatt return home to find that history has been slightly altered by their exploits. Most importantly, Lucy discovers she is now engaged, her gravely ill mom (the always welcome Susanna Thompson, from Arrow) is alive and healthy, and her sister has been erased!

My two cents: I’m a time-travel sucker who loves Syfy’s 12 Monkeys, but I can understand the Timeless creators’ desire not to get too complicated with their show. After viewing the first two episodes, it feels like the NBC drama is going for the rollicking, humorous tone that Legends of Tomorrow can’t quite seem to hit — and a lot of the time, the show achieves it. Plus, Spencer, Barrett and Lanter (who appears to be having a blast playing an adult, finally) are a compelling group of actors.

Grade the Timeless premiere via the poll below, then hit the comments to back up your pick!