For a full recap of what went down during Monday’s Scorpion premiere, you needn’t look further than the episode titles: “Civil War” and “More Civil War.”

Throughout the super-sized Season 3 debut, just about every character was at odds with another, thanks to the multiple cliffhangers that viewers were left clinging to last May. Happy and Toby? Not speaking. Walter and Paige? Kept apart by Paige’s new beau, Tim. Sylvester? Loyal only to Super Fun Guy.

Of course, there was also a much more literal civil war going on during these two hours, thanks to a team of Bulgarian hackers. They commandeered America’s defense system, turned military members against each other and threatened to end the lives of thousands of citizens.

But thanks to a few games of baccarat, a confetti cannon and some, uh, giant balls — it’s not what you think, pervs! — the safety of the United States was, of course, restored.

As for the other kerfuffles… 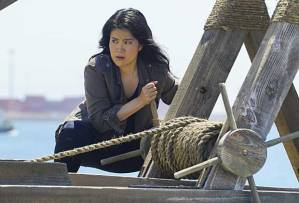 HAPPY DAZE | Toby, still reeling from his rejected wedding proposal and the knowledge that Happy is, in fact, married, decided to dig into his girlfriend’s records to track down the name of her hubby — to no avail. At first, Happy tried to assure Toby that she has nothing particularly special to hide; she’s simply trapped in a loveless marriage to someone she doesn’t have a future with, and if Toby can promise to trust her, she’ll take care of everything and return to her stable relationship ASAP.

Later in the premiere, though, when Happy got a moment alone with Walter, she surreptitiously asked her friend if he’d wiped her marriage records before Toby got a peek at them. “Absolutely I did,” Walter responded. “Do you want Toby to know who you’re really married to?” We didn’t get any further intel on Happy’s marriage after that — but be sure to leave your best guesses of the husband’s identity (and/or casting suggestions!) in the comments section.

LOVE IS A BATTLEFIELD | Walter, having worked up the courage to tell Paige how he feels about her, showed up at her and Tim’s romantic Lake Tahoe weekend… only to find the pair engaged in a full-fledged make-out sesh. Feeling silly, Walter tried to skedaddle, but when Homeland Security wrangled Team Scorpion for their next case, Walter, Paige and Tim all ended up on the same emergency flight back to Los Angeles. “Awkward” does not even begin to cover it. (Walter tried to convince the couple that he was merely visiting Lake Tahoe for the jazz festival, but Paige and Tim certainly knew better.)

But wait! It gets worse! Halfway through the team’s mission to save America, Paige discovered that Walter had tried to sabotage her entire weekend with Tim. He was the one who called the hotel and messed with the reservation, forcing Paige and Tim into separate bedrooms. He was the one who filed a complaint with the health department and got Lake Tahoe’s renowned 24-hour restaurant shut down before Paige and Tim could eat there.

Paige, rightly furious, told Walter he was being “a jealous infant” and dismissed him. But once she was out of earshot, Walter admitted aloud, “I came to Lake Tahoe to tell you I love you” — and everyone on the communications feed heard him. Including Tim. Awesome.

Later, once Team Scorpion had successfully saved the country, Walter steeled himself to finally confess his feelings for Paige. But just before he could, Cabe stopped him from doing so, telling Walter in no uncertain terms that he doesn’t deserve a woman as emotionally mature as Paige — not when admitting his love for her could ruin the team.

So, having had his ego bruised more than a few times that day, Walter apologized to Tim for creating an uncomfortable love triangle with Paige. As she and Tim left the Scorpion garage for a dinner date, Walter dialed up the health department to make a complaint about the restaurant… but then, thinking better of it, hung up the phone.

With that, I hand it to you, Scorpion fans. What did you think of Monday’s season premiere? Grade it in our poll below, then hit the comments with your full review.