One thing is not for debate, presidential or otherwise, as Fox’s Lucifer dives into Season 2 after a one-week break: Mum is going to be tons of fun.

Viewers got only a glimpse of Lucifer and Amenadiel’s mother at the close of the season opener, when she appeared at LUX covered in blood and looking surprisingly distraught for being the Devil’s maker. What brings Mum to Earth, and how will she get along with her boys not to mention her onetime torturer, Maze?

Making her full-on debut this Monday at 9/8c, Tricia Helfer shared with TVLine a look at the potential for family feuding ahead, plus why Mom’s “supreme” assets have the Battlestar alum hitting the gym as much as ever.

TVLINE | Tell me about how the role was pitched to you. How was Charlotte (as Mom comes to be known) first described?
I was definitely a little concerned — like, “I just want to make sure the character isn’t arch, or twisting her hair….’ I mean, I already liked the show. I was surprised at how funny it was, and obviously how charming Tom [Ellis] is, so I was intrigued but I definitely wanted to know more. So I sat down with [showrunners] Ildy [Modrovich] and Joe [Henderson] and they pitched me the first part of the season, “the arc of Mom,” and immediately I was hooked. They basically said no, there are going to be a lot more layers to her. She is definitely going to have an agenda but she’s not just this evil person 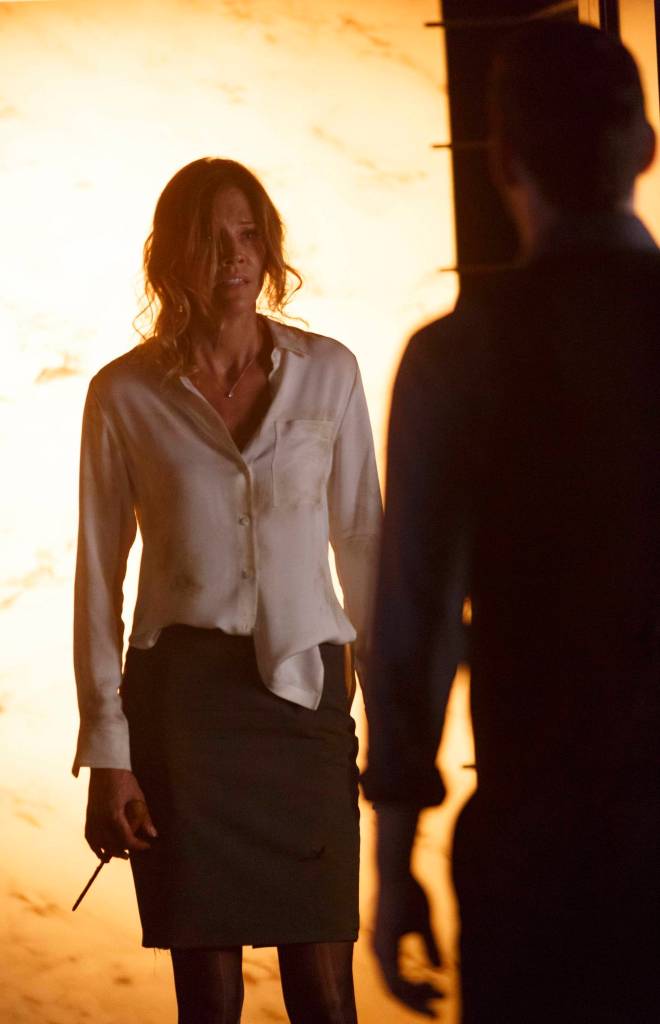 coming in to be one-note. Also, everybody harps on the fact that she’s the mother of the Devil, but she’s also the mother of angels.

TVLINE | I enjoyed the way she was introduced at the close of the premiere, because it invited sympathy. She didn’t arrive with fire and brimstone and talons.
Exactly. You were left not knowing what she’s going to be, but I think you had to have some sympathy for her, because she obviously went through something.

TVLINE | In that same episode, Lucifer told Dr. Linda about his childhood and what all went wrong back home — how when he got banished, Mom didn’t do a thing. Does Charlotte have her own version of those events? Is Lucifer maybe not remembering things correctly?
Charlotte definitely has her own version of events, and we get into it in Episode 2. Yes, these are celestial beings, but at the end of the day they’re a family, and sometimes as parents, in order to protect your children, you maybe hide a bit of the truth. There are a lot of factors that parents have to deal with, especially under the insane circumstances they were dealing with.

TVLINE | Speaking of the kids, compare Mom’s relationship with Lucifer versus Amenadiel.
Well, Amenadiel has always followed more his Father’s word. Amenadiel was the one that carried Mom down to Hell, on his Father’s command. So now that Mom is back on Earth, he is also very distrustful of her, but throughout the episode we’re shooting now, and because of things that happen along the way, he starts to question: Should he have been believing of his mother more along the way? She’s now here on Earth seemingly caring about him and loving him and being there for him, so he becomes closer to his brother in many ways, and he definitely becomes closer to his mother. In some ways, the longer Mom’s on Earth, the closer she gets to Amenadiel and the further apart she grows from Lucifer, which is the opposite of how it started out. 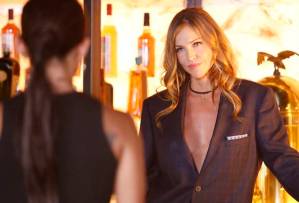 “frosty” be a generous way of describing her dynamic with Maze?
[Laughs] “Frosty”? Definitely. Lucifer tasked Maze with torturing Mom in Hell, and torturing is certainly one thing that Maze enjoys doing, but Mom is the one person that she could never break. Not only because Mom is, I suppose, one of the ultimate supreme beings, and thus is ultimately more powerful than Maze, but there’s also this line, “Hell punishes people for what they’ve done wrong, but I actually didn’t do anything wrong, and that is why you could never break me.” So while Maze is excited that Mom is in a human body, because she thinks that she can now actually harm her, Mom is pretty resilient! But the further we go along, Mom has a manipulative side, she definitely has an agenda — she dislikes humanity and demons. To put it point blank, she’s kind of stuck up! [Laughs] She definitely believes her way is the right way, and she wants what was taken from her — and she will kind of stop at nothing to get it. But in the beginning, we definitely have a lot of fun.

TVLINE | Yeah, we just shared a clip of where Charlotte strips down in broad daylight because she takes things a bit too literally.
She just doesn’t know! She knows about humanity, but that was her ex-husband’s “toy”….

TVLINE | It’s like when you see anything that reminds you of an ex. It raises the hairs on the back of your neck.
It raises the hairs, it leaves a bad taste in your mouth. That’s what humanity is to Mom. She could care less about it. But the fact that she’s stuck in a human form leads to some rather awkward situations. It’s probably around the sixth episode where she really has kind of settled in and gotten to know a bit about how things work. She’s intelligent, but it’s the small details, like the things you just don’t say to people. There’s some situational humor, and that is one of the layers that I was excited to hear about when I first sat down with Ildy and Joe.

TVLINE | I said that to Tom last time I spoke to him, that the show is just so funny, so quotable…. They strike this great tone.
And that’s what I was struck by when I watched the first season. In these Season 2 episodes, there’s some stuff that’s really funny, but when there is heartfelt stuff, it really affects you, you’re really drawn in by it. Because you’ve got these two sons that haven’t had their mother, in many ways they almost revert back to vulnerable boys who want her love, because they haven’t had it.

TVLINE | This week’s episode makes clear that Mom is very, very pleased with the “supreme hindquarters” of the human form she eventually settled into. Does that put a lot of pressure on Tricia Helfer?
[Laughs] I certainly am making sure I go the gym….

TVLINE | Were you like, “Guys, can we dial it down, maybe take out one or two of these references to her ‘exceptional ass’?”
Of course, I don’t see myself that way, so I take it more as a joke versus being literal. I read it more as I’m similar in age to them [as Charlotte], so it’s shocking for them to see somebody that they may find attractive and it’s their mother. It’s not like my hindquarters are actually that supreme! But compared to what they would think of as their mother, yeah, it’s a very awkward situation. This wasn’t the first body she inhabited, but with this one she seems to be getting attention, and there’s a scene in the third episode where she realizes she can use this body to her advantage. 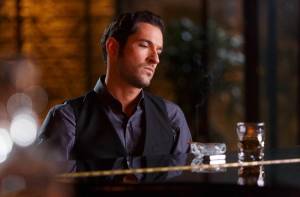 I wanted to ask you was about the Battlestar Galactica nod that was made, when she first stumbled into Lucifer’s club….
It is so funny because [the song] “All Along the Watchtower” is this huge element in Battlestar Galactica, but I honestly didn’t notice it when we were filming, because Tom prerecorded it. And even when I was watching and live-tweeting the episode, it didn’t dawn on me. And then I started getting all these tweets! So I immediately emailed Joe, “Did you guys do that on purpose? Because that’s pretty brilliant.” And it was a complete coincidence, because they had chosen it for the song itself. Tom is very involved in some of the musical choices, especially the ones that he sings, and Joe said that Tom wanted to do “All Along the Watchtower” — but this was before I was even cast! On set the day after the premiere aired, the director, Nathan Hope, was like, “What is all this about ‘All Along the Watchtower’? I don’t understand!” [Laughs] It was just a fun coincidence.