During Sunday’s Season 5 premiere, Sherlock worries that his partner might be restless after five years as a P.I. He notes this is her third career, so he has to wonder if her wanderlust has subsided. Joan agrees that life is short and she hasn’t been “a construction worker yet or a biker [or] Indian chief.”

“You think I don’t get the Village People reference, but I do,” Sherlock replies.

During the course of tracking down a serial bomber, Joan realizes she and the suspect have someone in common: Shinwell Johnson (new series regular Nelsan Ellis, True Blood), a drug dealer whose life she saved as a surgeon after he was shot by rivals. He’s now on parole, working in a boxing gym and cleaning up other people’s spit. But back in prison, Shinwell worked in the cafeteria with the potential bomber, so Joan pays him a visit. Immediately, there’s a level of connection between the two that suggests Shinwell wasn’t just a regular patient to Joan. She gives him her card in case he needs anything. 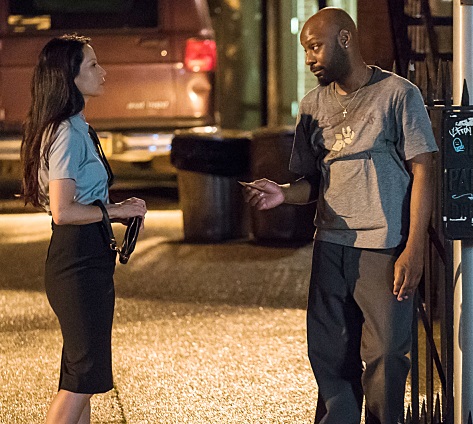 Sherlock picks up on the “warmth” between his partner and Shinwell during their first meeting. (“What kind of a name is Shinwell?” “What kind of a name is Sherlock?”) Joan is horrified at the idea that Sherlock might be suggesting they slept together. She explains that she’s proud of how she saved his life under extreme circumstances, causing Sherlock to wrongly assume that she is nostalgic for her old life. It’s “helping people get better” that Joan misses, especially now that Sherlock doesn’t need her as a sober companion.

Shinwell brings the P.I. team valuable intel, but he also wants something: to pick Joan’s brain about how she went from doc to her current profession, because he wants to change, too.

“I think the answer is to let people help you,” she later tells him, paying a visit to his apartment. As they prepare to go on a walk, the camera pans back to reveal that Shinwell was holding a gun behind his back during the exchange. The ex-doc is still a lifesaver.

Elementary fans, what did you think of the season opener? Grade it via the poll below, then hit the comments to back up your pick!