If you’re tuning into Sarah Jessica Parker‘s new HBO comedy Divorce hoping to see Season 18 of Sex and the City, you might be disappointed. But actually, this might be better. (Certainly better than that last SATC movie.) Taking a hard look at love and marriage through a darkly comedic lens, Divorce (premiering Oct. 9 at 10/9c) is raw and uncomfortable at times… but it’s also one of the best new comedies of the year.

Parker stars as Frances, a suburban wife and mother who finds herself increasingly irritated with everything her husband Robert (Thomas Haden Church) does. The way he hums along with Coldplay in the car. The way he repeats funny lines on TV instead of laughing at them. His mustache. And when their married friends Diane (Molly Shannon) and Nick (Tracy Letts) have a very public spat during a birthday party, that spurs Frances to make a decision that’s been years in the making: She wants a divorce.

Barrel of laughs, right? A couple’s contentious divorce might not sound like fertile ground for comedy, especially with two teenaged kids involved, but Divorce fits right in with the current wave of “sad comedies” like You’re the Worst and BoJack Horseman. Like those two shows (both fantastic), Divorce manages to provide laughs and also illuminate life’s painful truths better than most dramas. Frances and Robert’s disintegrating marriage — at times, bittersweet; at others, just plain bitter — is a dynamic we don’t often see on TV. And the sheer, brutal honesty of it is refreshing. 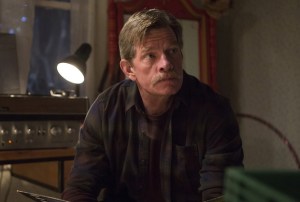 Parker and Church have a lot of heavy lifting to do here, balancing humor with emotional truth, and they’re both up to the task. Frances isn’t exactly Carrie Bradshaw — she’s not as bright-eyed and romantic — but Parker is right at home playing both her daffy pratfalls and her emotional baggage. (Carrie had plenty of ugly relationship moments on Sex and the City, too, you know.) And Church, an Oscar nominee for Sideways and a TV comedy veteran dating back to Wings, might even outshine her. Robert is a profoundly sad man, a volcano of male resentment, and the childishly vindictive way he lashes out at Frances to soothe his wounded ego is both tough to watch and hilarious.

Parker’s name is the biggest one attached to Divorce, but two other names behind the scenes give us a good idea of what tone to expect. Creator Sharon Horgan is also behind Amazon’s deliciously witty UK rom-com Catastrophe, and that show’s lewd dialogue and unflinching view of romance serve as a blueprint here. Plus, Girls veteran Jesse Peretz directs the first three episodes of Divorce, and that show’s lyrical sense of melancholy hangs over Divorce as well. (Make no mistake: This is most definitely a dramedy.)

There’s an element of class commentary going on here, too, that’s interesting. Frances and Robert are clearly upper-middle-class — he’s a contractor; she’s an executive recruiter opening an art gallery — and their idyllic, snow-covered neighborhood in upstate New York is lined with beautiful homes. But everyone living in them is miserable. Their clothes are gorgeous, but their faces are tired. It’s an old cliché that money can’t buy happiness, but Divorce proves that in spades.

Though Parker and Church dominate most of the screentime, Divorce has a few more pleasures tucked away in its supporting cast. A definite standout is SNL alum Shannon as Frances’ hard-partying friend Diane, the kind of woman who cackles too loudly after a few glasses of wine and is personally insulted by her husband’s weight gain: “He did it on purpose.” Plus, we get Jemaine Clement from Flight of the Conchords as Frances’ art-professor lover Julian — though not enough of him, for my taste. (Frances’ other friend Dallas, played by Mad Men‘s Talia Balsam, isn’t as well-defined, at least in the early episodes; she’s just a jaded sounding board.)

But this is ultimately a show about Frances and Robert, and how two people who were once madly in love can eventually grow to not stand the sight of each other. They know each other very well… maybe too well. And Divorce bravely digs into all the messy stuff that happens when that kind of love fizzles out. As Frances asks in the aftermath of Diane and Nick’s fight, “How do you go from eight years of a happy marriage to wanting to blow someone’s head off?”

THE TVLINE BOTTOM LINE: With a wicked sense of humor and two strong lead performances, Divorce is a venom-tinged treat.