ABC clearly loves Hayley Atwell, though not enough to keep Agent Carter on the air. So after giving Peggy her walking papers in May, ABC has Atwell fronting this fall’s Conviction, a snappy, Scandal-esque legal drama (premiering Monday at 10/9c). But is it worthy of Atwell’s considerable talents, or your time? The jury, as they say, is still out.

When we meet Hayes Morrison (Atwell), she’s stretching and dancing in a jail cell. She’s been there before, you see: She’s the wild-child daughter of a powerful political family — her mom’s a U.S. Senator; her dad used to be President — and this time, she’s been nabbed for cocaine possession. But she’s also a brilliant legal mind, so D.A. Conner Wallace (Eddie Cahill) has a proposal for her: Head up his newly formed Conviction Integrity Unit, and she’ll avoid prison time… and embarrassing her mother mid-campaign.

The CIU digs up old cases where there might have been a wrongful conviction and looks to uncover new evidence to (possibly) overturn them. So Hayes and her team of legal eagles are giving convicts a second chance — and hey, she’s getting her own second chance, too! Reexamining the cases of the questionably convicted is squarely in the zeitgeist right now, thanks to Making a Murderer and Serial. And Conviction cleverly grafts that trendy genre onto a sexy, Shonda Rhimes-style procedural, with plenty of brisk banter and cool clothes sprinkled throughout.

At first, Hayes is happy to delegate all the legwork to her subordinates, disinterested as she is in breaking a sweat to investigate lost causes. (“Working these pointless cases with you, that’s my prison,” she flatly tells a team member.) But once the team delves into their first investigation — a football star convicted of his girlfriend’s murder — Hayes’ legal instincts kick in. Atwell has fun playing up Hayes’ glaring flaws and prickly personality, and she even ably handles an American accent (which is more than can be said for a lot of British actors on TV). 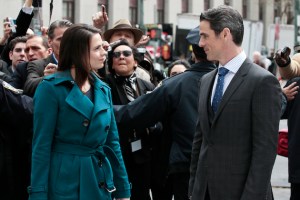 Stacked with familiar faces, Atwell’s supporting cast is one of Conviction‘s strengths. The CIU team includes Alias alum Merrin Dungey as lead investigator Maxine, The Following‘s Shawn Ashmore as ADA Sam, and The Walking Dead‘s Emily Kinney as eager paralegal Tess. Cahill — who, no matter how many episodes of CSI: NY he’s done, will always be Friends‘ Tag to me — is billed as Hayes’ “sexy nemesis,” and his scenes with Atwell are definitely trying for a smoldering, “Olitz” vibe. But anyone who’s seen a frame of television knows these two will eventually end up in each other’s arms, so even if there is chemistry, there’s no tension.

And there’s a larger problem with the character of Hayes: Who is she, really? Co-creator Liz Friedman has written for Orange Is the New Black and Jessica Jones, so she knows how to write women. So why then is Hayes such a wishy-washy character? One minute, she’s a self-destructive “bad girl” who couldn’t care less about her clients; the next, she’s working late hours and crusading for justice. Conviction is already hampered by an overreliance on the procedural formula and Shondaland-ish tropes; it doesn’t help when your antiheroine’s entire attitude shifts from scene to scene.

This has been a particularly strong fall TV season so far, with a number of new shows breaking through with bursts of quality and innovation. That doesn’t bode well for a show like Conviction, which is fine but not terribly inspiring. (Even the title is painfully generic.) We’ve seen these beautiful coats before in Olivia Pope’s closet; we’ve heard these emotional soundtrack swells before on Grey’s. Maybe a few episodes in, Conviction will find its voice, nail down the character of Hayes and become a worthy vehicle for Atwell. But with so many other things to watch… will viewers give it a second chance?