Man, Andre Lyon can’t catch a break. In the final minutes of Wednesday’s Empire, Cookie and Lucious’ eldest son — still reeling from the tragic death of wife Rhonda — was racially profiled by two white police officers, who arrested him on suspicion of burglarizing his own home.

Below, co-producer Carlito Rodriguez, who penned the episode with Cherien Dabis, spoke to TVLine 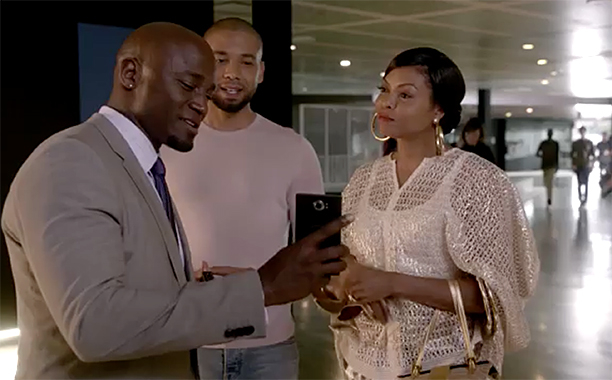 about the decision to make the beleaguered, grieving widower the entry point for the #BlackLivesMatter-themed storyline. The scribe also weighed in on the installement’s other big development: The arrival of Taye Diggs’ Angelo Dubois as Cookie’s new foil-turned-crush interest.

TVLINE | Talk to me about the decision to tackle the Black Lives Matter movement via Andre.
I wouldn’t necessarily say we’re tackling the Black Lives Matter movement… We wanted to talk about how the Lyon family deals with [issues of] class. Just because they left the hood, are they immune to some of the [realities]? And Andre felt like a good entry point for that story. He has done everything quote-unquote right. He got his Wharton MBA. He’s proper, respectable young man. So we wanted to challenge him with, “Do you think you’re immune? Did you forget that you’re black in America?”

TVLINE | It seemed odd that given how prolific the Lyon family is that the cops — and the neighbors — didn’t know who Andre was or that he lived on that block…
Do you know who Skip Gates is?

TVLINE | I do not.
He’s a scholar and a professor who lived in the same upper middle class neighborhood for a long time. One day he was in front of his house and the cops didn’t know who he was and they arrested him. They were embarrassed, but they did it. I only say that because, yes, it’s surprising, but them’s the rules.

TVLINE | Has Andre made peace with Rhonda’s death? Or will she continue to haunt him?
Andre [still] needs to work to make that peace. Andre and Rhonda’s relationship was very much a partnership. It wasn’t like one was leading the other. And to have a partner taken from you… is horrible. [But] at the end of the episode he tells his brothers, “I have to let Rhonda go.” That was his first step.

TVLINE | I found the Andre-Jamal scene particularly moving.
One of the things we say in the writers’ room is, “We know where our money is.” Any Cookie-Lucious scene — we know there’s money there. Those two actors are just incredible. [The same is true for] any scene with the brothers, whether it’s two of them or the three of them.

TVLINE | Is Angelo Dubois too good to be true? Is a DUI really the only skeleton in his closet?
[Laughs] It’s Empire. I don’t want to give anything away, but [Angelo] has to earn her trust. And Cookie’s a badass. So you have to be a little bit of a badass yourself. So we’re going to see if Angelo is up to the task.

TVLINE | Is Anika off the hook for her role in Rhonda’s death?
Is anybody ever really off the hook on Empire?