If you’re a viewer revisiting CBS’ medical drama Code Black, you probably noticed some new faces — and a few MIA ones — during Wednesday night’s Season 2 premiere. The biggest one, Rob Lowe’s Colonel Ethan Willis, makes his showy debut at the top of the hour as he and fellow doc Mike helicopter to a shark attack in Malibu, where they turn a victim into a human Twinkie. I’ll explain in a bit.

From the get-go, Ethan sets himself apart as a maverick: He lists stats about the dangers of helicopters, but he’s not afraid to fly. While treating a shark-bite injury, he whips out a new medical procedure that’s only been tried on pigs – but successfully! – that causes some substance to ooze out of the patient’s open wounds. “Like shooting whipped cream into a Twinkie,” he describes. Cool fix, but can we not talk about the poor, bleeding boy like that? (The off-putting dessert comparisons continue when Heather likens him to an eclair.)

Once back in the air, Mike falls out of the helicopter, plummeting 20 feet to the sand, so Ethan jumps into the ocean to help him. Angus is understandably concerned about his unconscious brother’s well-being and objects when Ethan wants to drill a hole into Mike’s skull in the middle of the ER. “I’m the best hope your brother has. Now step off,” Ethan responds, asserting himself.

At the end of the episode, Mike’s still out, but at least he’s alive, so Angus apologizes to Ethan. Campbell overhears their conversation and asks Ethan if his placement at Angels Memorial was a reward or a punishment. “Both,” the colonel replies. #tormentedbackstory 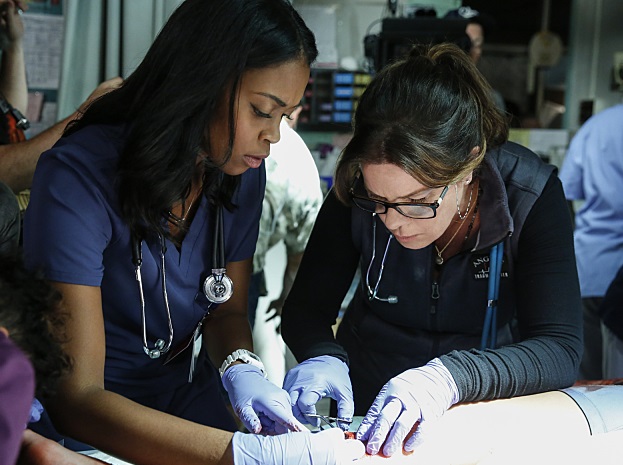 Ethan isn’t the only newcomer to the hospital. Enough time has passed that Mario, Angus and Malaya are now second-year residents, overseeing a fresh crop of first-years. (Their colleague Christa’s absence, as well as Neal’s, is never mentioned.) Charlotte (One Life to Live‘s Nafessa Williams), the former child star of a Harry Potter-like movie franchise, makes the most memorable impression, correctly diagnosing and saving a woman. However, she gives the credit to fellow first-year Noa (Flesh and Bone‘s Emily Tyra). They both need friends, she explains. Their third counterpart Elliot (Heroes‘ Noah Gray-Cabey) isn’t around for the bonding because he’s too busy washing a burly patient after having the gall to ask Jesse where the break lounge is.

Other highlights from the premiere:

* Dr. Campbell is now running the OR and the trauma department. Leanne is not thrilled. But hey, at least she gets to stare at Rob Lowe?

* In a nice throwback, Jesse gives the new residents the same “your mama” speech he gave to Mario, Angus, Malaya and Christa.

* Yes, that was Colin (Mike Erwin) from Everwood as the groom-to-be visiting his father in the hospital!

What did you think of the Code Black season opener and the new characters? Grade it via the poll below, then hit the comments to back up your pick!