“There is no fear like the fear of losing a child,” Lee told us in Wednesday’s American Horror Story: Roanoke. Nonetheless, Flora’s vanishing act was far from the only way that the thriller tried to scare us in “Chapter 3.” Did it succeed? Let’s go over the frights of the week, then you can debate it out in the comments.

GOT MILK? | As the hour began, Lee was grappling with the very real possibility that she was no longer searching for her daughter but for her daughter’s body, and bristling at the “help” that she was getting from the authorities. By and by, she discovered in the woods the girl’s doll torn apart and interspersed with parts of a piglet. Near the nightmarish craft project, she, Matt and Shelby found a farm one step removed from Texas Chainsaw Massacre. In its barn was — good God! — a coupla dirty-as-hell kids suckling at the teats of a sow.

WHERE THERE’S SMOKE… | The farm, it turned out, had been the residence of the Polks, who’d apparently anticipated the cops’ arrival and skedaddled, taking Flora and leaving behind the boys (who were only able to utter one thing, “Croatoan,” as a kinda warning). Mind you, Mason wasn’t buying that. He rather violently accused Lee of stashing their daughter somewhere, so that they could run off together when everybody gave up searching for her. Later that night, the police called, saying that a body had turned up. It wasn’t Flora’s, though, it was Mason’s, burned to a crisp! 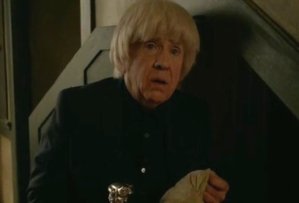 LEAVE IT TO CLEAVER | Distracted by Mason’s grisly demise, Matt nearly missed two motion-sensor alerts that tipped off him and Shelby to the fact that Lee had snuck out for more than long enough to murder her ex. The three of them were busy arguing about it when in walked Cricket (Leslie Jordan), a wiggy psychic who quickly deduced that Flora hadn’t been taken by the living but by Priscilla, who died in the late 1500s. Holding a séance to plead with the deceased child to return the living one to her mom, Cricket instead met The Butcher (Kathy Bates), the cleaver-wielding protector of the property (and no fan of Priscilla’s). When the psychic explained that “oh, honey, this land does not belong to the dead,” the spirit reacted by breaking all of the Millers’ living room windows.

HISTORY REPEATING | Bad as the situation was, Cricket assured Lee that he could take her to Flora — for $25,000. Matt, for one, wasn’t about to fall for his “Cirque du Soleil bulls— act.” Lee did fall for it, but rather than write a check, she pulled her gun. Before anyone got shot, Matt threw out the psychic. First, however, Cricket whispered to Lee that her other daughter, 4-year-old Emily, said hello and wondered why she’d stopped looking for her all those years ago. So Lee had two kids go missing on her! The next day, she visited Cricket, who revealed not only that The Butcher’s real name was Thomasyn White but that she’d been turned out by the Roanoke colonists she’d once led and was even betrayed by her son Ambrose (Wes Bentley). 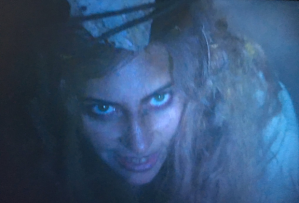 LET’S MAKE A DEAL | Left to die in the woods, The Butcher was saved by a sorceress type (Lady Gaga). All Thomasyn had to do in exchange for her assistance was surrender her soul. That done, she exacted revenge on those who had banished her — but spared Ambrose — and moved the Roanoke colony inland to the site of the Millers’ house. Off that conversation, Cricket led the Millers and Lee into the woods, where he pleaded with The Butcher to convince Priscilla to return Flora. If she did, Lee said they’d burn down the house (which, to Shelby’s surprise, Matt had agreed to). Along the way, Matt vanished in the woods and was spotted by Shelby hooking up with Lady Gaga’s character. In retaliation, Mrs. Miller called the cops to arrest Lee.

So, what did you think of the episode? Now would be an excellent time to hit the comments.