Are two designated survivors better than one?

Yes, it’s true — for the past decade, there have been two designated survivors named prior to each State of the Union  gathering, one to rebuild the executive branch and one to lead a new legislature. “It is an actual, real thing,” executive producer Jon Feldman says of the early plot twist. “Just as Kiefer’s character” — who was elected as an Independent, into a Democratic administration — “is the designated survivor, 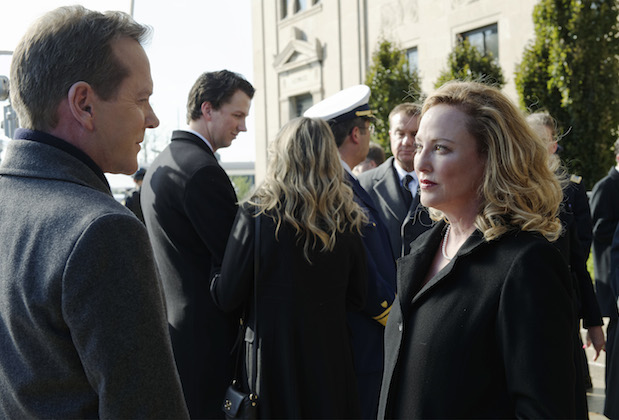 the opposing party that’s not in power” appoints one of their own.

If this is news to you, know that it was news to Sutherland as well.

“I knew about the first designated survivor before I read the script. I knew it was in the Constitution,” he tells TVLine. “But I didn’t know that there’s a representative from each party. So in our scenario, the Republicans have a designated survivor in case something happens to me.”

Of course, the freshman drama’s version of D.C. has already suffered so much calamity — and there isn’t a show without Tom Kirkman — so it’s a safe bet that Sutherland’s character will go unscathed (for now). Still, Congresswoman Hookstraten will have a say.

“If something doesn’t happen to my character, she is there to voice that party’s point of view,” Sutherland explains. “Again, going back to the Constitution, no one person can ever solely be in power in the United States, and that’s why they have this.”

In the wake of the series-starting tragedy, will Hookstraten serve as a sympathetic “yes man” to the in-over-his-head President Kirkman, or might she seek to usurp his tenable grasp on power? Says EP Feldman, “We’re not quite sure if she is an ally, an obstacle… or a combination of both.”

Want more scoop on Designated Survivor, or for any other show? Email insideline@tvline.com and your question may be answered via Matt’s Inside Line.