A family feud of sorts is percolating on NBC’s Blindspot (Wednesdays at 8/7c), now that Jane’s truthfulness and loyalty to her “mother,” Shepherd, has been called into question, by Cade’s resurfacing.

Luke Mitchell shared with TVLine Roman’s own POV on sister “Remi” and the big, deadly test she is about to face. Plus: Who would win in a fight between all of Mitchell’s badass TV characters?

TVLINE | People want to warm up to your Blindspot character, but then he goes and jabs a syringe in Jane’s neck….
Yeah, right? You just never know what you’re going to get with ol’ Roman.

TVLINE | How bad is it looking for Jane, now that “Mom” (played by Michelle Hurd) thinks she’s a rat?
Jane’s no worse off necessarily than whats she’s been through in the past season — she’s been living the most stressful life anyone could have. But having said that, Shepherd does up the ante in terms of trying to get Jane back to being her old self, to who we know her to be. With that comes Jane’s first big test from Shepherd, a mission she goes on with Roman. And born out of that is a bit of tough love from Roman, to impress upon her the importance of her finding “her way back” — because if she doesn’t, Roman is scared of what Shepherd might do.

TVLINE | Do you think Roman is strictly worried for Jane, or is he himself also a bit disappointed in her?
Definitely both. He wants her to come back, and the more that doesn’t happen, the more that time goes on, the more frustrating it is for Roman. Jane is Roman’s world, essentially, she’s the closest thing he has, so it’s frustrating for him to have her back but not have her back, for her to not remember the bond they created through the traumatic history they share.

TVLINE | At one point in this week’s episode, someone refers to Roman as “the maniac brother.” Can you talk about the damage he lives with? Has life with Shepherd all these years not been honky dory?
Oh, he is the most damaged person you could possibly imagine. He’s had a terrible, terrible upbringing. His parents were murdered, he spent time in this orphanage in South Africa during apartheid. He was basically trained as a child soldier, in really horrible conditions, but he endured that life with his older, stronger sister — hence the bond that they share.

And then he is rescued by this American woman who takes them under her wing and essentially acts as their mother, but she probably isn’t the most mothering person in the world! You can read into the fact that they don’t call her Mom, that they call her Shepherd. And in the scenes you’ve seen, Shepherd has shown one moment of care for Roman, but in the same breath she says, “You’re not as good as Jane, you can never do what she does.” As a result, he’s got all this scar tissue surrounding him, not just in physical appearance but emotionally as well.

TVLINE | That was my next question: Is there a specific story behind his scar? Seems there should be, given the extra half-hour in makeup you probably have to sit through.
It’s more like 15 minutes [Laughs], but yes, we do go there, and there’s definitely a story about Remi and Roman’s time in the orphanage, which is imperative both to their story and to them as individuals.

TVLINE | How soon will we start getting a sense of what exactly Stage 2 is about?
Pretty quickly, I’d say. Basically, they have their foot on the accelerator and they’re pushing it to the ground, going as fast as they can. You won’t be waiting terribly long at all.

TVLINE | Who would win in a fight: Roman, Agents of SHIELD‘s Lincoln or The Tomorrow People‘s John?
[Laughs] It depends on the motivation. Technically speaking, if Lincoln wanted to kill the other two guys, he’d probably be able to do that. But John’s pretty crafty, and he can teleport all around. And Roman’s the most brutal of them all, so….

TVLINE | It’d be a helluva fight, that’s for sure.
It would be interesting!

TVLINE | Did you have to learn anything new, skillset-wise, for this role? Any close-quarters combat?
To be honest, I didn’t have time to learn anything before we started shooting, so I’ve really been flying by the seat of my pants. I’ve really been tested and challenged on endurance, fight choreography…. Obviously it helps to have played these [kinds of] roles previously; I’ve had to learn a lot and that helps with muscle memory. Learning fights is like learning a dance. But in terms of fitness, I’m consciously trying to up my regime just to make sure I’m as fit 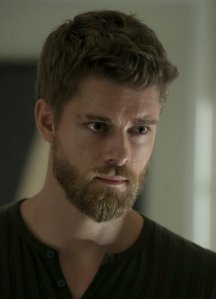 as I possibly can be, so that I’m ready for whatever the writers throw at me.

TVLINE | And lastly, the big question: How much of that facial hair is yours? None of it? Some?
It’s all me, baby! It’s my “holiday beard.” I auditioned with it because I didn’t think I was right for the character initially — “Nah, I’m not going to shave” — and lo and behold, [showrunner] Martin Gero loved the beard and wanted me to keep it. I was like, “Hell yeah!” I love it, because it’s obviously a really different look. Then you start noticing how itchy it is, but I’m learning all sorts of things about beard maintenance and beard oil… the whole thing!

Want more scoop on Blindspot, or for any other show? Email insideline@tvline.com and your question may be answered via Matt’s Inside Line.