The following contains spoilers from Sunday night’s Season 6 premiere of ABC’s Once Upon a Time.

Who saves the Savior?

The Season 6 premiere of ABC’s Once Upon a Time left Emma and viewers wondering that very question, when in the course of trying to find and help the refugees from the Land of Untold Stories, Emma experienced hand tremors and fleeting visions of a nighttime street fight. She eventually split away from Hook and followed a red bird (per an imprisoned Hyde’s instructions), until she ran into a former oracle. The young woman begrudgingly revealed more of Emma’s vision, of her future — and in it, she winds up on the wrong end of her unseen opponent’s blade.

Or, will she….? “The show remains a show about hope,” Once co-creator Adam Horowitz allows. As such, “Our characters are going to fight the battle to see if that is a fate that is immovable.”

Of course, that would require Emma sharing her bleak fate with someone — anyone — which she is not yet looking to do, concealing it even from Hook. “It’s a lie that’s coming from what is a good place in her mind,” says Horowitz, “but he’s probably not going to feel that way if he finds out.”

Surveying Emma’s private plight — as Jafar snarked to Aladdin in the cold open, Saviors never get happy endings — cocreator Eddy Kitsis says, “Now that she said I love you [to Hook], we thought, ‘Well, if you’re letting that wall down and all those good things in, all the bad things are going to come in,’ and that push/pull is what’s going to be driving them” in Season 6.

As for Emma’s eventual slayer, the hooded person’s identity will continue to be a mystery — though it very well might be someone we have met before. 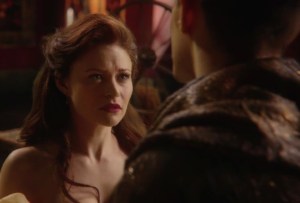 in the season opener, Rumple traveled to the Temple of Morpheus to insert himself into Belle’s dreams, where in a scary, Upside Down-y version of his castle he recreated the moment they fell in love, in the name of waking her. But just before he was able to do so, Belle was reminded of just what kind of scalawag her husband is and all his “unbroken promises,” by the aforementioned Morpheus — aka a grown incarnation of their unborn son! So even when she was woken, by her son’s gentle forehead kiss, Belle made clear to Rumple that she would not repeat past mistakes and wouldn’t be sharing a home with him back in Storybrooke.

“Belle really is kind of in a place where she’s given up on Rumple,” says Kitsis, “but they have a child and that makes things messier, because you actually have to put aside your own feelings and put the child first,” no matter how “severely disappointed” she is in her mate.

Rumple meanwhile “truly loves Belle, he truly wants that child and truly wants to be a good dad,” Kitsis adds, “but he is a gangster and he’s not giving that life up.” As Horowitz notes, “When they’re in the dream world and she asks if he would change for her and he says, ‘For you, I would be the best man I can be,’ it’s a very carefully chosen set of words. He’ll be the best man he can be, but he can’t quite get to that place of actually being a good man. [T]hat’s the push/pull in that relationship, because she does love him and see the good and the bad in him and sees the potential, and it’s that frustration that continues to grow.”

Will Morpheus continue to play a role in his parents’ predicament? “Yes, we’re going to see him again,” answers Horowitz. “This was a taste of an introduction.” 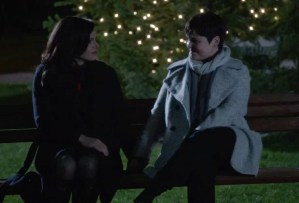 other emotional story found Regina announcing to Snow White that the “story” she had been living up until now was over, and that she was ready to start living a new one in which the Evil Queen plays no role. (Ha, little does she know with whom her dissed sister Zelena is having cocktails at the farmhouse!) As Regina and Snow walked away, a feather from one of dearly departed Robin’s arrows floated down onto the bench where his soul mate had just sat.

“When [Regina] explains that she chooses to have hope and believe that Hades was lying, that’s her taking a leap of faith into believing he wasn’t obliterated, that he went to a better place, he moved on,” says Horowitz. “And when the audience sees the feather come down, that’s telling [us] she was right to have that belief.”

What did you think about the start to Season 6?