CBS’ Hawaii Five-0 got people talking with Friday night’s Season 7 premiere, which surprised us with an uncanny cameo and then wowed us with an epic, parkour-filled foot chase.

TVLine hopped on the phone with showrunner Peter M. Lenkov to talk about recreating the late Jack Lord — who of course played Steve McGarrett on the original H50 — for a heart-to-heart with Alex O’Loughlin’s team leader, as well as find out the trickiest part about filming that extended, white-knuckle chase.

TVLINE | Where did the Jack Lord idea suddenly sprout from, seven seasons in?
I actually wrote the scene a few years ago — it was going to be the last scene of the series. As I realized that the end may not be as soon as I’d thought, I wanted to get it on screen before anybody else did something like that.

TVLINE | What all was involved? Motion capture, CGI..?
It was a voice actor, a real actor, a body stand-in and then CG work. Alex acted against a real actor, just to have something to play off of, and we put the voice in afterwards. We had a body double that looked like Jack Lord, who has the same bone structure, and the face was CG [laid] over the actor’s face.

TVLINE | Best I recall from my days as a rugrat, it was quite the soundalike.
Very much so. Actually, at the premiere in Hawaii, people who knew and worked with Jack were blown away as soon as they heard his voice on screen. You hear his voice before you see his face, and people were awed. It was pretty amazing. Look, CG like that is not perfected yet, but…

TVLINE | But it was pretty good. It was like 5 percent videogame-y, but otherwise….
Well, we tried. And I just wanted to do it before anybody else.

TVLINE | Did you need to get permission from Jack Lord’s estate? How does that work?
We went through his estate, which is owned by a bank, and they approved the script back in June, knowing that it was about honoring his legacy. 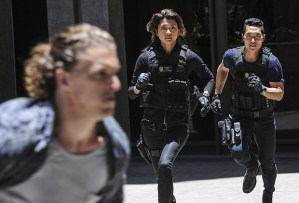 chase scene, meanwhile, was just bananas. How long did that take to shoot?
That took, off and on, a couple of weeks. I told [director] Brian Spicer at the beginning that I wanted to have like six or seven minutes of a chase — I wanted The French Connection on foot. And those guys, they delivered. Jesse La Flair is a real parkour champ [and played the suspect], and there were a lot of cameras strapped to him, so we could get real POV shots. It was pretty amazing.

TVLINE | Is he the one who suggested the balcony sequence, or was that something you had seen and wanted?
That was a collaboration between Jessie, our stunt coordinator Jeff [Cadiente], and Brian, choosing locations that we could get and use, that worked into our schedule since we were doing little pieces at a time.

TVLINE | What was the trickiest part of shooting that chase?
Convincing the studio to air all of it. [Laughs] It’s a little bit under six minutes but it is pretty long, and to get a network to air something like that, which is just straight action…. They’re always worried the audience is going to change the channel, so that was the big feat!