If you ever saw Michael Crichton’s cheesy but enjoyable 1973 Westworld, you should go ahead and erase it from your memory before sampling HBO’s series adaptation (premiering Sunday, Oct. 2, at 9/8c). The small-screen upgrade — developed by Jonathan Nolan (Person of Interest) and Lisa Joy, and boasting J.J. Abrams among its executive producers — is about as different from its big-screen counterpart as Ava in Ex Machina is from R2-D2 in Star Wars.

Set in the near future, the drama focuses initially on Dolores Abernathy (Evan Rachel Wood), a Wild West cowgirl unaware — at least at first — that she’s actually a man-made “host” at the titular adult theme park. All the pie-eyed optimist knows is that she loves her daddy, painting and — we learn in Episode 1, “The Original” — Teddy Flood (James Marsden), a repeat visitor with a chivalrous nature and a million-dollar smile. 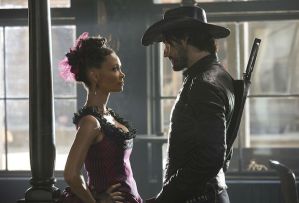 By making this star-crossed couple our introduction to the show, the show, in turn, makes it easy to get hooked. Wood is heartbreakingly earnest; Marsden, the kinda hero they don’t make anymore (but that you always wish they did); and their romance, clearly built on land mines. It doesn’t hurt, either, that sprawling Westworld is gorgeous, from its period-perfect sets to its breathtaking scenery — including Thandie Newton as the local madame.

If Dolores and Teddy are the show’s soul, its mind is represented by the puppetmasters pulling the strings behind the scenes. They’re a mixed bag, ranging from the sublime (Anthony Hopkins, reserved and thoughtful as Westworld’s big kahuna; Jeffrey Wright as its enigmatic programming chief) to the subpar (Sidse Babett Knudsen and Simon Quarterman, unable to flesh out their sketchy connivers). But, whether you’re intrigued by the characters, you’re still likely to be sucked in by the series’ mythology, a seemingly impossible puzzle that Ed Harris’ ice-cold gunslinger is dangerously determined to solve.

Once, as in the film, “hosts” begin malfunctioning, all hell threatens to break loose. Yet Westworld, as interested in real morality as it is in artificial intelligence, is still introducing its cast. Episode 2, “Chestnut,” adds to the mix two standouts — Jimmi Simpson as an appealingly forlorn guest (and yes, “appealingly forlorn” is a thing — you’ll see) and Ben Barnes as, essentially, the id to his pal’s superego.

It’s giving away nothing to say that, from the start, it’s clear that this won’t turn out well, certainly not for all of the characters to whom you’ll become attached. (Or, as an outlaw predicts in Episode 4, “All of it — gods, men, everything else — will end badly.”) However, in the nimble hands of the series’ creators, the disaster for which things are headed is guaranteed to be one of the beautiful variety.